↑Butler: Unbeaten Bulldogs, No. 1 in the Sweet 16, is in the regional finals for the first time in school history.↑Jairus Hamilton, Cannon School: Hamilton, a 6-foot-8 junior forward, received an offer from the Kansas Jayhawks Tuesday.↑Forest Hills:... 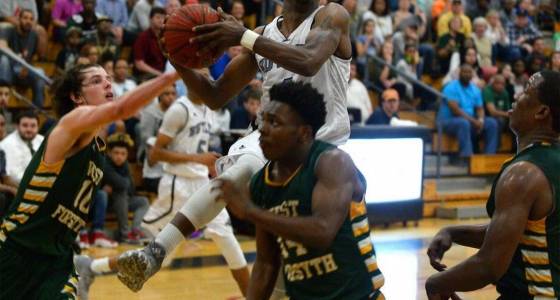 ↑Butler: Unbeaten Bulldogs, No. 1 in the Sweet 16, is in the regional finals for the first time in school history.

↑North Surry: turning into a 2A playoff buzzsaw. Beat 2A power Lincolnton by 34 Saturday and beat 2A power Shelby 80-59 Tuesday.

Jehlon Johnson, Lincoln Charter: eight points, 14 rebounds in a 75-65 win over Winston-Salem Prep in the 1A quarterfinals. Jackson Gabriel had 23 points and Kody Shubert 18.

Wendell Moore, Cox Mill: 21 points, 10 rebounds in a 55-52 win over Hickory in the N.C. 3A quarterfinals. Teammate Jacari Johnson had 10 points, nine rebounds.

Butler 61, West Forsyth 52: Butler remained unbeaten with a regional semifinal win at home and stayed on course to become the first Mecklenburg County 4A team since Olympic in 2013 to finish the season unbeaten and win a N.C. 4A state title. Butler (30-0) trailed 13-9 after the first quarter but rallied with a 13-6 run in the second quarter. Butler got 16 points from Zane Rankin, 13 from Chase Morrissette-Barnett and 12 from Gerrale Gates, a typical balanced scoresheet for the Bulldogs. West Forsyth got 12 points each from K.J. Henry and Justin McCluney. Butler will play Southwest Guilford (27-3) in the regional championship Saturday.