LAS VEGAS -- Martin Truex Jr. finished speaking to reporters after winning the NASCAR Cup race Sunday and retreated into a corner of the media center where a tablet awaited with the video cued up.Truex had to see the Kyle Busch-Joey Logano brawl, too."I'm... 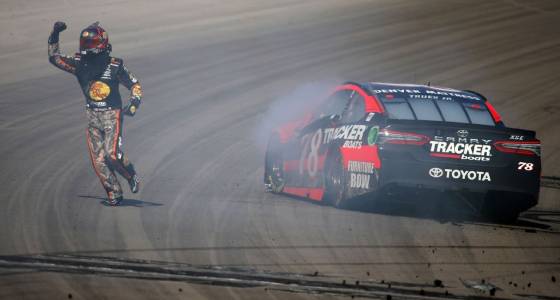 LAS VEGAS -- Martin Truex Jr. finished speaking to reporters after winning the NASCAR Cup race Sunday and retreated into a corner of the media center where a tablet awaited with the video cued up.

Truex had to see the Kyle Busch-Joey Logano brawl, too.

"I'm sure NASCAR is going to love that one," Truex said.

Truex passed Brad Keselowski with two laps to go and avoided a last-lap wreck and ensuing fight that left Busch's forehead bloodied after a wild finish.

As Martin Truex Jr. was celebrating, Kyle Busch was seeking vengeance in the form of fisticuffs after last-lap contact with Joey Logano sent Bush spinning into pit road.

An aggressive Logano got into Busch as they raced for third, sending Busch spinning down pit road at Las Vegas Motor Speedway.

"It was nothing intentional," Logano said. "But obviously he thinks that."

As Truex headed toward Victory Lane, Busch walked down pit road, turned right and threw a right hook at Logano's face. Logano's crew members brought Busch to the ground as NASCAR officials yelled for them to stop.

When they were separated and Busch got to his feet, he had a bloody gash above his right eye.

"There wasn't much talking, just a lot of swinging," said Logano, who said he was unhurt. "I was racing hard there at the end."

Busch, who got into contention after recovering from a speeding penalty that left him a lap down, was escorted to the infield care center and quickly released as the track buzzed.

"I got dumped. He flat-out just drove straight in the corner and wrecked me," Busch said. "That's how Joey races, so he's going to get it."

The fight overshadowed a dominant day for Truex and a tough-luck finish for Keselowski, who appeared to be pulling away after a restart and on his way to his second win in as many weeks when he ran into mechanical problems.

"I just know it was something major," he said. "It wouldn't turn and I lost brakes."

Truex passed him and held on to become the first driver to win all three segments in the new stage racing format of the Monster Energy NASCAR Cup Series.

Truex won the first two race stages and retook the lead with 39 laps to go after a lengthy cycle of green-flag pit stops. After a hard-charging Keselowski went in front, Danica Patrick blew an engine, bringing out a caution.

Keselowski, who started from the pole, just beat Truex out of pit road after their four-tire stops. Keselowski chose the outside lane on the restart and shot ahead until his car slowed at the end of the 267-lap race.

That gave Toyota a win after Ford victories in the season's first two races.

"I've been on the other side of those things plenty of times, so it definitely feels good to take advantage of somebody else's issue for once," Truex said.

Jimmie Johnson was 11th, marking the first time since he became a full-time driver in 2002 that he has failed to have a top-10 finish in the season's first three races.

Dale Earnhardt Jr. finished 16th, and Kevin Harvick's hope of bouncing back from a disappointing finish at Atlanta lasted only 68 laps. He crashed hard into the wall when his right front tire exploded.

"It started vibrating four or five laps before it blew out," Harvick said. "I was trying to ride it to the end of the stage."

Harvick was credited with a 38th-place finish a week after leading 292 laps only to be caught speeding on pit road. He surrendered the points lead to Keselowski.

The 1.5-mile track was slick as the temperature was in the 80s in the desert. And it was a rough homecoming for Daytona 500 champion Kurt Busch. Shortly after venting his frustration over the radio, he had to come in for a new battery with 66 laps to go and finished 30th.

NOW WHAT?: NASCAR will review the fight and issue any penalties in the coming week.

SPEEDING: Kyle Busch was one of three drivers to get caught speeding on pit road, with the pass-through penalty leaving him a lap down. Speeding has been a hot issue this season as NASCAR has gone to more precise timing lines.

LONG WAIT TIMES: Harvick was annoyed at how long it took the medical crew to get to his car and transport him to the infield care center. This season, for the first time, NASCAR is using a traveling set of doctors and paramedics in hopes of better consistency.

"I thought we made that better, but obviously we haven't," Harvick said.

TROUBLE: Patrick (rear gear change) had to start from the rear, fell a lap down in the first stage and ended up 36th after the dead engine. Ricky Stenhouse Jr. finished 33rd in a backup car after an axle shaft poked out of a wheel.

UP NEXT: The middle race of the Western swing is next Sunday on the mile track at Phoenix.