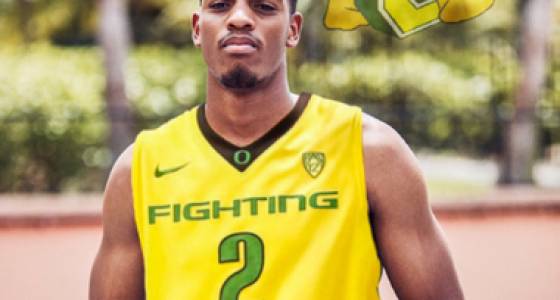 On Tuesday, the 6-foot-6, 196-pound wing, out of Centennial High School (Las Vegas, Nevada), was selected to represent Team USA in the 2017 Nike Hoop Summit at the Moda Center on April 7.

The annual high school exhibition game pits Team USA against Team World in a showcase of the world's top young basketball talents, including the past seven No. 1 picks in the NBA draft.

But for the second straight season, the Nike Hoop Summit with have a local flair.

However, while Pritchard was a bubble candidate for last year's event, Brown was practically a slam dunk.

Earlier this year, he became Oregon's first McDonald's All-American Game selection since Michael Dunigan in the class of 2008.

Brown committed to Oregon in November over fellow finalists Arizona, Georgetown, Kansas, Ohio State and UNLV, as well as offers from Duke, Texas, UCLA and others.

As a junior, he was named first-team all-state in Nevada after averaging 19 points, 9.5 rebounds and 6.3 assists per game.

There will be plenty of hype and fanfare when it comes to Brown's Duck debut, but fans will get a sneak preview this year in Portland against the world's best young athletes.

Tickets for the 2017 Nike Hoop Summit are available here.