Galleries Videos CONTACT ADVERTISE
Famagusta 16°
light rain
BUSINESS EDUCATION ENTERTAINMENT HEALTH POLITICS SCIENCE SPORTS TECHNOLOGY
10:58 Kratom Tea: How Is It?
11:46 Office Furniture Products for you!
12:17 Top Clubs, Their Value, Revenue And Current Standings
11:14 Reasons Why Rewarding Yourself is a Good Practice
10:56 What Egypt Has to Offer for US Travelers
12:48 How to Maximize Compensation in Your Personal Injury Case
12:28 How To Use a CBD Vape Pen for Anxiety
05:28 Second-Hand Vaping Is Harmless
05:15 Guide to Vaping and CBD Flower for Beginners
14:55 COVID-19 Recovered Ronaldo and Zlatan outshining everyone in Serie A
BIST
1325
GOLD
459.681
USD
7.9493
GPB
10.5839
EUR
9.4663
Breaking News
Tips & Trick To Buying Jewelry Items Without Spending Much
Close

Trayce Thompson ready to get back on the field for Dodgers

GLENDALE, Ariz. >> Trayce Thompson watched a lot of baseball last year. He did not enjoy it.“It was tough, man,” the Dodgers outfielder said of being sidelined for half of the season with a back injury. “It’s one thing to... 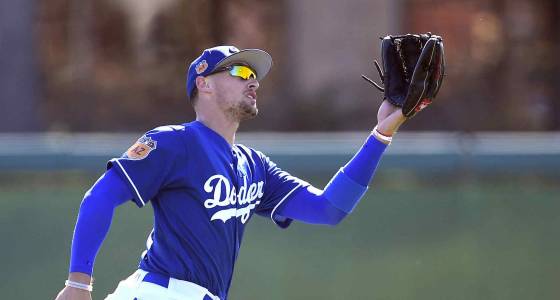 GLENDALE, Ariz. >> Trayce Thompson watched a lot of baseball last year. He did not enjoy it.

“It was tough, man,” the Dodgers outfielder said of being sidelined for half of the season with a back injury. “It’s one thing to see your team play without you. That’s difficult. But it’s a tough thing to watch them down the stretch and make the playoffs and play those intense games and not be a part of it. The guys were great, trying to make me still feel part of the team. But it was tough not being able to be out there with them.”

Thompson learned a lot of difficult lessons last year – like, in retrospect, realizing that his back injury was more serious than he wanted to believe. He first began feeling the discomfort in May but played through the pain. Hitting .270 with an .865 OPS on May 28, he hit .185 with a .636 OPS over his next 39 games. He further injured the back when he ran into a wall while making a catch in July.

That’s when stress fractures in two vertebra in his lower back were found and Thompson headed to the DL, his season over on July 10.

“It definitely was (more serious than he wanted to acknowledge),” Thompson says now. “But I didn’t feel as bad as it sounds.

The pain didn’t fully disappear until December. Even then, Thompson had to be patient as the team’s medical staff continued to limit his activity level and workouts. He is fully participating in drills now that spring training has begun but probably won’t be allowed to play in games until the second week of the Cactus League schedule. Simulated games are in his immediate future.

“Trayce is right on track. He really is,” Dodgers manager Dave Roberts said. “The No. 1 thing is we just want to make sure he’s healthy.

“He hasn’t played in a major-league game since July. So it’s been awhile. He still needs to get out there and see live pitching. But there’s that balance in spring training to where you don’t want to run him out there too much versus getting him the at-bats so he can feel good about things when he hasn’t competed in awhile. That’s something we’ve got to kind of work through.”

Thompson has reason to be eager for the reins to be taken off. The Dodgers have a deep group of outfielders fighting for spots on the season-opening roster. As many as nine can be considered candidates for the limited number of spots – Andre Ethier, Andrew Toles, Franklin Gutierrez, Yasiel Puig, Joc Pederson, Scott Van Slyke, Thompson and utilitymen Kike’ Hernandez and Charlie Culberson.

“I know if I’m healthy and right, I can have as big an impact as anybody,” Thompson said confidently.

Pitching coach Rick Honeycutt said he has seen nothing but progress from Ryu who is trying to return after shoulder and elbow surgeries the past two years.

“No negatives for me,” he said after Friday’s session. “It’s been impressive. ... His delivery looks great. The command is great. Now, I just think it’s a matter of him getting the reps.”

Honeycutt said he has been particularly encouraged by the way Ryu has bounced back from each throwing session so far with no setbacks. The next step should be throwing in a game but it hasn’t been decided yet whether that will be in a simulated-game setting or a Cactus League game.

“Right now, I’m hoping if he feels fine, he’ll want to pitch in a regular game,” Honeycutt said. “But we’re not there yet (to make that decision).”

The Dodgers will open the Cactus League schedule at Camelback Ranch against the Chicago White Sox on Saturday. Clayton Kershaw is scheduled to start for the Dodgers and pitch just one inning – his preference, according to Roberts. Rich Hill (on Sunday) and Kenta Maeda (Monday) are expected to pitch two innings each in their first spring starts. Roberts said he plans to play the rest of his starters for two plate appearances each on Saturday.