As the clock winds down to Thursday’s NBA trade deadline, the Detroit Pistons, Toronto Raptors, Oklahoma City Thunder and Chicago Bulls are all reportedly involved in heavy trade chatter and speculation as the league returns from the All-Star break and... 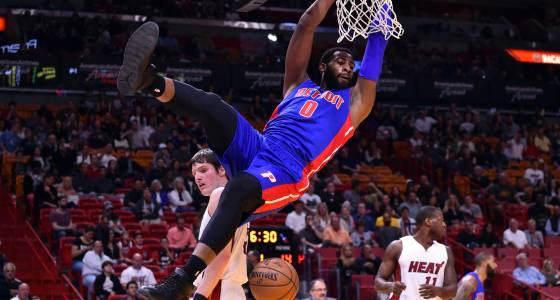 As the clock winds down to Thursday’s NBA trade deadline, the Detroit Pistons, Toronto Raptors, Oklahoma City Thunder and Chicago Bulls are all reportedly involved in heavy trade chatter and speculation as the league returns from the All-Star break and preps for the second-half of the season.

The Pistons, who have under-performed after much hype in the preseason, have reportedly contemplated and at least heard offers for both star center Andre Drummond and forward Kentavious Caldwell-Pope, ESPN’s Marc Stein reported Thursday night.

Drummond is considered one of the premier young big men in the league and has played in the first year of a five-year, $127 million contract he inked with Detroit last summer. However, with Detroit going nowhere fast, it has “not discouraged” teams' overtures for Drummond or Caldwell-Pope, a solid two-way forward who’s recently become more of a three-point threat.

The Pistons had also dangled point guard Reggie Jackson and were in “serious” talks with Minnesota and Orlando for his services, but those negotiations have evidently stalled, according to Stein.

Meanwhile, the Raptors may also be close to landing Phoenix Suns swingman P.J. Tucker in exchange for a first-round pick and forward Jared Sullinger.

While some may scoff at the move, given Tucker’s simply a role player, Toronto is in need of some cap space. It’s presently more than $15.2 million over the cap and has just under $4 million in luxury tax space and Tucker’s $5.3 million expiring deal could go a long way in making the Raptors stronger players in free agency and help keep point guard Kyle Lowry this summer. Lowry has a player option worth $12 million for next season but is likely to pass that up to hit the open and very lucrative market.

Denver was also asked by Toronto about forward Wilson Chandler, a more capable scorer than Tucker, but is seeking a first-round pick as well. The 29-year-old Chandler is a far more versatile and proven scorer that could help a Raptors offense that’s already No. 5 in the league with 108.5 points per game, but has sorely missed a more reliable third option after All-Stars Lowry and DeMar DeRozan.

Still, with Toronto lacking cap space, taking on Chandler’s deal could complicate the matter. He’s scheduled to make $12 million and $12.8 million over the next two seasons.

The deal makes sense for Denver, especially if it can get back a pick in a loaded draft. The move could free up more opportunities for budding big man Nikola Jokic, and the Nuggets can afford to offload some scoring as it clings to the West’s final playoff spot. Denver hasn’t made the postseason since 2013.

Stein has also reported that the Thunder are in hot pursuit of Bulls forward Taj Gibson, another solid frontcourt scorer and rebounder on an expiring $8.95 million contract that could provide OKC with more depth behind injured forward Enes Kanter.