In the era of the College Football Playoff, one loss won’t ruin your season.But go on a bad run and you’re done.With that in mind, we’re examining the most challenging stretches of games for all 14 teams in the SEC.Next up in our series... 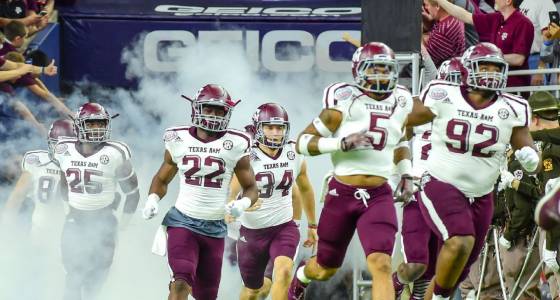 In the era of the College Football Playoff, one loss won’t ruin your season.

But go on a bad run and you’re done.

With that in mind, we’re examining the most challenging stretches of games for all 14 teams in the SEC.

Next up in our series is Texas A&M.

November has been the most difficult month for the Aggies to succeed in recent years, going 3-9 against SEC opponents. In 2016, they went 0-for-3 against the SEC in the final month of the regular season.

This year, they open the month with Auburn at home, which will be a challenge. The Aggies beat the Tigers in Auburn in 2016, but the Tigers won at Kyle Field in 2015 (that seems to be the pattern with these two teams, as the road team has won every time since the Aggies joined the SEC).

They'll get a chance to collect themselves with a game against a Group of 5 opponent, but the last two games will be the toughest challenges: road games at SEC West opponents. Shea Patterson beat the Aggies in his collegiate debut last year and he should be better in 2017. As for LSU, the Aggies are 0-for-5 against them since joining the conference. In 2016, when the Tigers were missing several key starters, the Aggies were still unable to get the job done.

Good or bad, the month of November will likely define the Aggies' 2017 season.