HALIFAX, ENGLAND—The Toronto Wolfpack had to dig deep to clinch its first competitive rugby league victory on Saturday, overcoming the west Yorkshire amateurs of Siddal 14-6 in the third round of the Ladbrokes Challenge Cup.The Wolfpack, the sport’s... 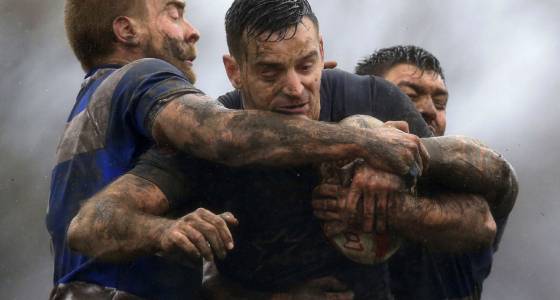 HALIFAX, ENGLAND—The Toronto Wolfpack had to dig deep to clinch its first competitive rugby league victory on Saturday, overcoming the west Yorkshire amateurs of Siddal 14-6 in the third round of the Ladbrokes Challenge Cup.

The Wolfpack, the sport’s first transatlantic team, trailed 2-0 in the first half and 6-4 in the second at a windswept and rainy CWC Park, despite dominating possession and mounting one attack after another on the Siddal goal-line.

However, late tries by Greg Worthington and Adam Sidlow ensured the visitors finally got the win their performance deserved.

Toronto opens league play on March 4 at the London Skolars in the Kingstone Press League 1, the third tier of English rugby league. Its first home game at Liberty Village’s Lamport Stadium is May 6 against Oxford. Its goal is to win promotion twice to reach the elite Super League.

Toronto’s English coach Paul Rowley, whose players have been training in Yorkshire near Siddal’s base since November, said prior to the game that Siddal would be a tougher foe than some of the pro teams the Wolfpack will play this season.

A successful amateur side, Siddal has sent players to the pro ranks and become a home for former pros. It is a well-established club with more than 350 players spread over 16 teams from youth to masters.

Toronto’s best-laid plans were upset even before kickoff as captain Craig Hall was forced to drop to the bench after suffering an eye injury in the warmup. He was later to come off the bench to kick a conversion.

Toronto also lost Fuifui Moimoi, a former fan favourite for the Parramatta Eels in Australia’s NRL, who was sent off in the dying minutes for a high tackle.

Toronto had the best of the first half but only led 4-2 thanks to some stout Siddal defending.

Former Samoan international Quentin Laulu-Togaga’e — known as QLT — came close early for Toronto but stepped into touch as he headed for the corner. Some poor handling in the difficult conditions cost the Wolfpack other opportunities before Siddal took the lead with a Gareth Blackburn penalty kick on 30 minutes.

Toronto finally broke through via a try in the corner from American Ryan Burroughs.

The Toronto attacks continued in the second half, only to be rebuffed at the goal-line again.

Blackburn missed a penalty 15 minutes into the second half and Siddal took full advantage, going 6-4 up with a well worked George Ambler try. Blackburn missed the conversion.

Toronto kept their heads and replied with a fine try of their own, Worthington putting the finishing touches to a sweeping attack to retake the lead at 8-6. Sidlow, finding a crack in the rapidly tiring Siddal defence, added the insurance try which was converted by skipper Hall.

Moimoi’s red card came to late to offer the English side any hope of staging a comeback.