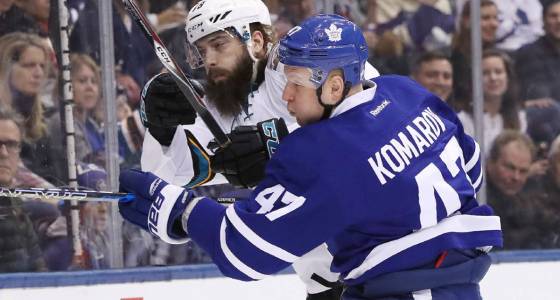 If NHL teams make a habit of game-planning around matchups with potent forward lines, Brent Burns complicates matters. San Jose’s No. 1 defenceman also happens to be among the league’s top scorers this season. His 65 points in 61 games put him just five points back of league leader Connor McDavid. Heading into Monday the next defenceman on the list, Ottawa’s Erik Karlsson, sat 11 points back of Burns’ pace. So let’s just say containing Burns, a native of Barrie who has nine points in 13 career games against the Leafs, will be a challenge for Leaf Morgan Rielly and his defence partner Nikita Zaitsev. Burns is a career plus-10 against Toronto, his best mark against any opponent.

Tyler Bozak missed Saturday’s game with an infected cut on his right hand. Bozak said he suffered the cut at Carolina on Feb. 19 and, after playing with it — “Your gloves aren’t the cleanest” — eventually needed to go to the hospital to have it treated with antibiotic IVs. . . . Bozak practised in San Jose on Monday and is expected to be available on the three-game California trip. . . . If Burns could somehow overtake the field, he’d become just the second defenceman in NHL history to win the Art Ross Trophy. Bobby Orr achieved the feat twice, most recently in 1975.