ST. PETERSBURG, FLA.—Slow to finish preseason is better than slow to start the regular season, as Toronto FC found out the hard way here Saturday evening.The Reds took on Chicago Fire at Al Lang Stadium in one last test before opening the 2017 year... 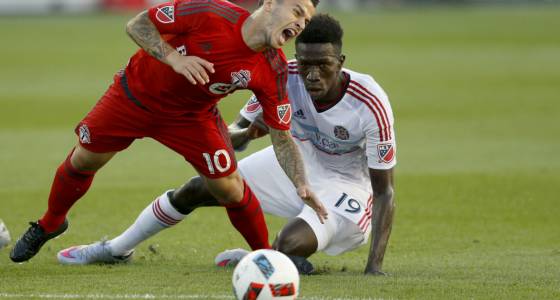 ST. PETERSBURG, FLA.—Slow to finish preseason is better than slow to start the regular season, as Toronto FC found out the hard way here Saturday evening.

The Reds took on Chicago Fire at Al Lang Stadium in one last test before opening the 2017 year against Real Salt Lake next weekend.

On paper the game looked over before it started; last year’s Eastern Conference No. 3 side against its No. 10 team.

But it was Chicago who pulled off a dominant 4-1 victory, scoring three in a first half that saw Greg Vanney play 10 of the 11 players who started the MLS Cup final last December.

“I thought we were a little bit slow in every aspect,” Vanney said. “The ball moved too slow, we were closing too slow, made some silly mistakes that gave away some very good looks on goal.”

Toronto dominated in possession but couldn’t find an opening up front and struggled to quell a counter-attack led by midfielders David Accam and Michael de Leeuw, who scored twice.

“Part of it is we’ve got a pretty veteran group and they’ve got one eye on making sure they get to the finish line, which is next week, the first game (in Salt Lake City).”

He expects that experience will mean his players are very aware that Saturday’s result wasn’t good enough and their play needs be raised a level if they want better results when it counts.

Being better in general is something Vanney still believes his team can achieve, despite the misstep.

After last year’s near MLS Cup win, the team knows how far it can go and how good it can be.

It starts this season ahead of where it did last year, the coach said.

“Though it didn’t at times look like it today, we’re working on more detail-oriented things than we did mid-season last year and toward the end of last year and so I think that’s a good sign.”

Defender Drew Moor, one of those veterans withdrawn at half time, said, hiccups aside, the team is still confident.

“We still feel like we have the same core group of guys, there hasn’t been a lot of turnover and it’s just more about fine tuning and getting our system nailed down and really maximizing what we feel like our potential is.”

But there will be some changes from the preseason roster this week, namely the addition or loss of young players. Toronto has to be roster compliant by Wednesday.

Vanney said he now has a pretty good idea about who’s staying and who’s going. Some of those decisions may have even been solidified in St. Petersburg.

“It’s possible (some guys won or lost a spot tonight,)” he said. “There’s some guys who were on the fringe trying to make a case of whether they’re really ready to help this team in terms of depth or if they need more time.”