Of late, the Blackhawks' top two lines have been engaged in a game of "Can You Top This?"The winner has been the entire team. First Jonathan Toews gets a hat trick last week. Then Patrick Kane does the same a game later. On Sunday, Jonathan Toews... 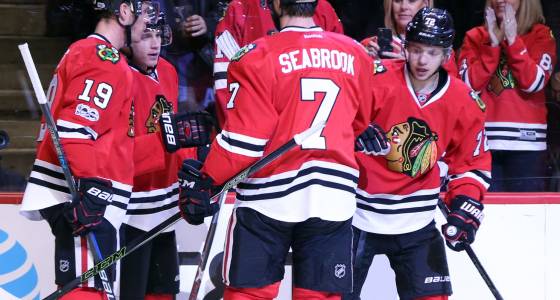 Of late, the Blackhawks' top two lines have been engaged in a game of "Can You Top This?"

The winner has been the entire team.

First Jonathan Toews gets a hat trick last week. Then Patrick Kane does the same a game later. On Sunday, Jonathan Toews scored the first goal of the night — so the second line had to get the winning goal.

Artem Anisimov put home the go-ahead goal 14 minutes, 40 seconds into the third for a 4-2 victory at the United Center, the ninth win for the Hawks in their last 10 games.

The Hawks also got a helping hand from Scott Darling, who made the start after Corey Crawford missed the game because of illness. Darling made 30 saves to keep the score tied 2-2 until Anisimov could score the winner off a perfect pass from Artemi Panarin that hit Anisimov's stick on the far post.

Toews downplayed the idea that any internal competition existed between the top two lines. However, Kane, who scored his 24th goal, said there was "absolutely" competition.

"There's definitely some motivation there, for sure," Kane said. "You see Johnny get hot, you want to follow him and he's been doing a great job of leading us as of late. That's an important thing. … They get that lead for us and you want to follow the way."

In the first period, the Blackhawks demonstrated why the give-and-go isn't just a basketball move.

Toews sent a pass cross-ice to Nick Schmaltz, who sent a perfect pass between the legs of a Blues defenseman and hit Toews in stride for the goal.

Fittingly, the two lines combined forces for the Hawks' second goal when Kane and Toews initiated a give-and-go on a power play that resulted in a goal for Kane from the left circle.

It was Toews' seventh goal in his last 10 games as he continues to produce with linemates Schmaltz and Richard Panik. The only player hotter than Toews is Kane, who has nine goals over the same stretch.

"It's good that both lines are producing and again, three of us had a ton of chances tonight," Toews said. "That's just the No. 1 thing for us. With 'Schmaltzy and 'Panner' the way they can shoot, the way they're playing right now, as long as we're creating those chances, eventually they're going to go in. … We're clicking and want to keep that going."

Sunday was a busy day around the NHL in advance of Wednesday's trade deadline. The Kings made a move to grab Lightning goaltender Ben Bishop while the Central Division-leading Wild made a big splash in getting Coyotes center Martin Hanzal and winger Ryan White.

But the Hawks haven't looked like a team in need of a major overhaul of late and thanks to the top two lines, they have become one of the most dangerous teams in hockey.

"I've always said if we don't make any moves we feel confident in this group," Toews said. "I think we're trending the right way. We're playing solid. All four lines are contributing in every which way. I love our group right now. Everyone is getting better individually, contributing more and more."

That goes double for the top two lines.

2. Scott Darling, Blackhawks: Filled in for Corey Crawford with 30 saves.