Long before his virtues as a baseball player prompted both intrigue and amusement within the MLB community, before his swing became a topic of analysis and derision among professional baseball scouts, and before the likelihood of his cracking an MLB roster... 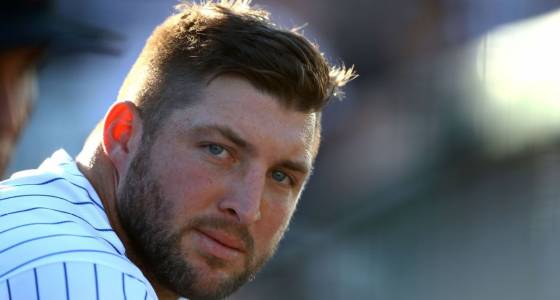 Long before his virtues as a baseball player prompted both intrigue and amusement within the MLB community, before his swing became a topic of analysis and derision among professional baseball scouts, and before the likelihood of his cracking an MLB roster became cannon fodder for daily sports talk shows, Tim Tebow had already made an indelible mark on the national scene.

He gained fame as a standout quarterback for the Florida Gators, winning two national championships (2006, 2008) and taking home the Heisman Trophy in 2007, but his appeal transcended his on-the-field heroics. The charismatic young Tebow, who spurred a phenomenon by kneeling and praying after big moments in a game, offered up an aw-shucks charm to go with his raw athleticism and bucked convention with his eagerness to share his religious beliefs.

Some people found him earnest and inspiring, while others thought he was disingenuous and contrived. A first-round draft pick, Tebow experienced a brief bit of success with the Denver Broncos in 2011 due to his penchant for come-from-behind victories. He even tapped into the cultural zeitgeist with his flair for the dramatic (SNL even created a skit in his honor, poking fun at the devout Christian by portraying a visit from Jesus to the Broncos' locker room). But his stint with the Broncos was fleeting. Replaced by Peyton Manning, Tebow was traded in 2012 to the New York Jets, where his deficiencies as a quarterback were exposed and his missteps mocked. Ultimately, he wasn't worth the media circus he created.

However, Tebow didn't fade into obscurity following his short-lived NFL career. Instead, he parlayed his brief stardom into a broadcasting career, where his efforts were met with praise. He was a natural on television and offered solid analysis, shining in a role with the regional SEC Network. Ultimately, a cushy TV gig was not enough to squelch Tebow's competitive drive, and despite the fact he hadn't played organized baseball since his high school days, the 29-year-old decided to give his dream of playing in Major League Baseball a shot.

What has transpired since then? Take a look:

ESPN's Adam Schefter revealed, via Twitter, that Tebow was training in pursuit of a career in professional baseball. Tebow spent almost a year training in Arizona and Los Angeles to hone his hitting and fielding skills in a sport he had not played on a full-time basis since 2005.

Schefter also reported that Tebow tried out for the Los Angeles Dodgers before the 2016 season and the team expressed interest in the former football player. But not everyone in the baseball community took Tebow seriously. Baltimore Orioles outfielder Adam Jones joked on Twitter that he was going to try out for the NFL since he has played in a few Thanksgiving football games since high school.

Tebow planned to continue working for the SEC Network and ESPN.

Tebow held a showcase for 46 scouts representing 28 MLB teams at the University of Southern California. He started by showing some good power in batting practice, but he did not look as good against real pitchers with major-league experience. The overall impression was that he has a lot of ground to cover in baseball, but teams were still interested, as five or six met privately with Tebow after the workout.

This was also when ESPN's Darren Rovell reported that it was not an accident that Tebow was wearing adidas shorts and cleats, as he signed a two-year endorsement deal with the shoe and apparel company.

Tebow signed a minor league deal with the New York Mets, which included a $100,000 signing bonus, as general manager Sandy Alderson insisted it was a baseball move and not a publicity stunt or marketing ploy. "He has demonstrated over his athletic career that he is a tremendous athlete, has got character, a competitive spirit. Aside from the age [29], this is a classic player-development opportunity for us," Alderson said.

The decision nonetheless was made at the highest levels of the organization -- by Alderson and chief operating officer Jeff Wilpon -- and did not intimately involve the team's baseball-operations personnel.

On the first pitch of his first organized game since a state semifinal during his junior year of high school, Tebow hit a 91-mph fastball over the left-center wall for a home run in a Florida instructional league game.

"It's fun to be back out there playing a game, playing a game I love and haven't played in a while, and getting to go compete at it too," Tebow said. "It's really fun."

The crowd, announced by the Mets at 269, erupted as Tebow connected and circled the bases.

After hitting .286 (4-for-14) with one home run, two RBIs and two walks in three instructional league games, Tebow was assigned to the Arizona Fall League by the Mets.

Tebow finished his Arizona Fall League performance with the Scottsdale Scorpions with a slash line of 194/.296/.242 in 19 games, with three doubles, eight walks and 20 strikeouts in 62 at-bats.

Among the other memorable AFL events for Tebow: comforting an autograph-seeking fan who had a seizure and briefly was unconscious until paramedics arrived; face-planting into the left-field wall while pursuing a fly ball; being sidelined for almost a week because of a knee injury suffered while awkwardly sliding; and having Scottsdale teammate/Phillies prospect Aaron Brown dress up as him in Denver Broncos garb on Halloween.

Despite shortcomings in the outfield, Tebow seemed to make strides at the plate as the AFL season progressed, especially in terms of catching up to fastballs. He repeatedly was rolling over and sending weak grounders to the right side of the infield during the opening week. In fact, excluding an 0-for-13 start, Tebow hit .245 the rest of the way in the league.

The Mets released their spring training major league camp invites and Tebow was not included. However, Alderson indicated that Tebow will participate in some of the team's Grapefruit League games on loan from minor-league camp.

"Too frequently for some and not frequently enough for others," Alderson deadpanned when asked about how often Tebow would be present. "He'll be around."

Tebow is expected to hold a spring training introductory news conference when he arrives in Port St. Lucie, Florida, for minor league camp with the Mets.