Tim Tebow backs away from making Mets as ‘ultimate goal’

PORT ST. LUCIE — Tim Tebow is living the dream.After a celebrated college football career and short NFL tenure in which he became a pop culture star, the former Heisman Trophy winner doesn’t know if he will ever play a major league game for the Mets,... 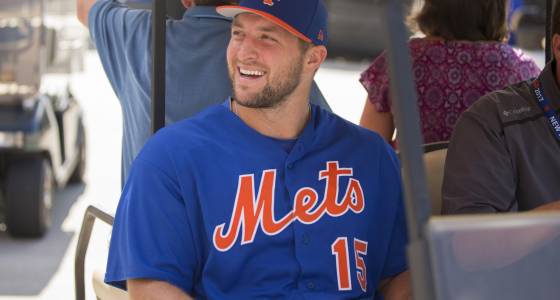 After a celebrated college football career and short NFL tenure in which he became a pop culture star, the former Heisman Trophy winner doesn’t know if he will ever play a major league game for the Mets, but says he will savor the scenery as long as the ride lasts.

“I don’t think I have to give my chances,” Tebow said Monday, when asked to provide odds he will reach the big leagues. “But [the majors] is not just the ultimate goal. The ultimate goal is to be able to enjoy it every day, and I can honestly say I’ve had so much fun training, pursuing it and getting hits, striking out, whatever.”

Tebow, 29, began workouts in Mets’ minor league camp, the continuation of an audition that began last September, when he attended the team’s instructional league after signing with the club.

Tebow, who hadn’t played competitive baseball since his junior year in high school, also participated in the Arizona Fall League, where he hit only .194 with 20 strikeouts in 62 at-bats.

“Obviously, I knew it’s a big challenge,” Tebow said. “You are picking up a sport after 12 years of not playing, but I understood it, and I think the challenge of it being so hard is part of why it’s so fun.

“It’s why it is something that I am enjoying and loving, because it’s a hard game. It’s not an easy thing to do. Hitting a baseball is one of the hardest things in sports, but I enjoy the process very much.”

Tebow credited his offseason workouts in the Jacksonville area with Daniel Murphy for preparing him for spring training. That included Thanksgiving morning, when the two convened for batting practice.

“I think [Murphy] is as much an addict for sports as I am,” Tebow said. “We were just continuing to grind every day and work hard and try to improve.”

Tebow spent 2012 with the Jets and was released after an unceremonious season in which he played quarterback and tight end. He was asked if he got a fair shake from the team.

“That’s not for me to decide at all,” Tebow said. “With the Jets situation, I learned so much from it and I’m grateful for it, from the highs there, which weren’t very many, but a lot of the lows. That was not necessarily the most fun situation, but there’s so many things I learned and tried to improve my situation.”