With South Carolina preparing to open its second spring practice under coach Will Muschamp on Saturday, the Gamecocks still have a long way to go before they are the SEC East contenders that Muschamp wants them to become.Among the issues that Muschamp repeatedly... 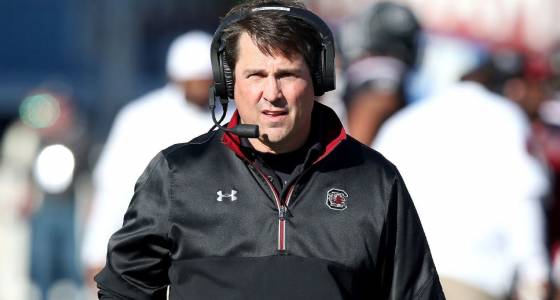 With South Carolina preparing to open its second spring practice under coach Will Muschamp on Saturday, the Gamecocks still have a long way to go before they are the SEC East contenders that Muschamp wants them to become.

Among the issues that Muschamp repeatedly addressed at his Wednesday news conference were developing better depth and toughness in Year 2. Those are key points in our three things to watch this spring at South Carolina:

1. Are the Gamecocks still soft? Muschamp believes South Carolina was simply not stout enough at the point of attack last year and noted that one offseason goal was to develop a tougher team. While it will be difficult for fans or media to evaluate the Gamecocks' progress in this area until the regular season begins, pay attention to what Muschamp says this spring. He's sure to offer clues as to whether the staff is satisfied with the level of competition.

It obviously was not up to the coach's standards in 2016.

"We struggled to run the ball offensively and we struggled to stop the run defensively and a lot of that goes back to toughness," Muschamp said Wednesday. "It goes back to the core values of our program, and we want to be a physically tough football team and we weren't. We were a soft organization last year and it was disappointing to put that on the field. Call it like it is. Physical is a state of mind and we've got to continue to buy into that and understand that."

We'll get to the offensive line momentarily, but keep an eye on the development of redshirt freshman defensive linemen Stephon Taylor, Kobe Smith and Aaron Thompson this spring, Muschamp said. Those youngsters should play a big role in South Carolina's attempts to reinforce the front line.

"We really need these next three guys: Stephon Taylor, Kobe Smith and Aaron Thompson to really step up," he said. "They've been through a redshirt season and these guys need to take a step forward for us defensively. A huge part of our success is going to be how those three guys continue to come on for us."

It's an especially big deal at left tackle, where the Gamecocks must replace Mason Zandi, a two-year starter. Muschamp said Malik Young could move over from right tackle tackle to take the job, but he will compete with redshirt freshman Sadarius Hutcherson on the left side this spring.

On the right side, Muschamp listed Blake Camper, Zack Bailey, D.J. Park and early enrollee Summie Carlay among players who will work there this spring.

The line returns four starters this spring and Muschamp said he was pleased with the group's depth entering spring practice. He said the goal will be to identify a pecking order among the top 6-8 linemen.

3. How will the quarterback shuffle work? Jake Bentley established himself as South Carolina's top quarterback option once he grabbed the starting role midway through last season. How much distance can he put between himself and the field this spring?

The QB competition will be unusual this spring.

Backup Michael Scarnecchia is returning from injury, and while Muschamp insists that Brandon McIlwain is still "battling to be the starter," the sophomore is also playing for the Gamecocks' baseball team. Muschamp's staff promised him that he could be a two-sport athlete at South Carolina, but common sense dictates that any distraction from football would likely damage McIlwain's chances at reclaiming the starting job.

"He's been involved in all of our meetings, all the mental stuff's going on," Muschamp said of McIlwain. "Again, in the recruiting process with Brandon and his parents, he was going to play baseball full time after his first spring, and that's where we are."

Bentley, meanwhile, has impressed his coaches with his work ethic and should only continue to grow as he gains experience working with offensive coordinator Kurt Roper. Bentley has the obvious advantage here. Let's see what he does with it over the next several months.