CaptionCloseOrion Anderson went with the graceful "peace" sign, quickly showing off two fingers for his achievement. Trent Svingala flexed and jumped into the arms of his coaches. Then there was Tyler Barnes, whose state-title celebration was virtually... 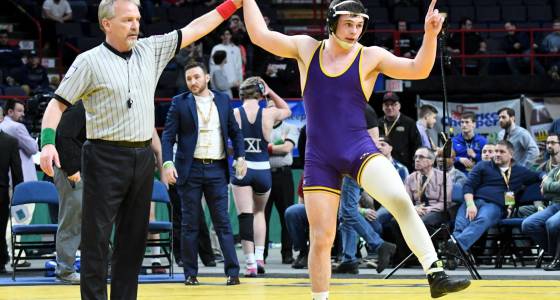 Orion Anderson went with the graceful "peace" sign, quickly showing off two fingers for his achievement.

Trent Svingala flexed and jumped into the arms of his coaches.

Then there was Tyler Barnes, whose state-title celebration was virtually out of this ... well, arena, anyway.

The Ballston Spa junior capped the year by finally getting past the quarterfinals and winning his school's first individual state championship in the sport. He flung off his match-issued red ankle bands and tossed them like confetti before storming for the nearest set of stairs he could find.

He was off to celebrate on the concourse — a 7-2 winner and first-time state title winner.

"It's just something I've been working for my whole high school career. It feels good to have it done," the 170-pounder (Division I) said of being the third and final Section II champion Saturday at Times Union Center.

It was not the deepest year for the locals, by far. But the three champions each offered plenty of intrigue — and a lot to remember.

Schuylerville's Anderson (120 pounds, Division II) became the third Section II repeat champion. Nick Gwiazdowski did it in 2010-11 before going on to become a two-time NCAA champion. Then Shenendehowa's Kevin Parker did it over the past two years.

Anderson, still just a junior, earned a 12-4 outcome against Luke Bokina (Mattituck, Section XI) that was simple and thorough.

"I wrestled aggressive," Anderson said. "And I wrestled my match."

So did Svingala, who ended his year 42-0 for Maple Hill and was Section II's first state champion in the Division II 106-pound weight class.

"This year is a little different," Svingala said. "At that point (last year) I was sitting up in the stands eating fried dough instead of wrestling. I like this better."

The second seed in the division despite four career victories over Charles, Svingala took his opponent down and to his back in the opening 20 seconds, then nearly did it again for a 6-1 lead after one period. Charles (52-3), a junior who won at 99 pounds a year ago, gave up two caution points in the second period.

"I definitely caught him off guard there," Svingala said. "It was a great feeling to get that first takedown out of the way and suck the life out of him almost. As soon as I hit, he has to come up and fight for me; it's not an even match anymore. He has to come from behind."

After raising his career record to 162-16, Svingala wore the look of a wrestler — and a state champion. He had a bloody face and ashen white skin.

"With him you've just got to wrestle tough and stay strong wherever you can," he said. "You've got to fight through all the head butts and stuff. I've got a little bruise up here (forehead), but it's worth it."

Of course, a night like this can be a heart-bruiser, too.

Shenendehowa's Kiernan Shanahan (145, Division I) ended his first trip to the final losing, 7-2, to Frankie Gissendanner of Penfield (Section V), who's now a two-time state champion.

"I don't know if I learned anything just from this particular match," the sophomore Shanahan said of a wrestler he's known from various club-level meets. "But I think just being here, hopefully that gives me an advantage in the future."

It also marked a tough end to the career of Hadley-Luzerne/Lake George senior Jason Hoffman. He lost in the final when an early slip quickly left him pinned. This was the 170-pounder's second finals loss (2015) among four top-four finishes.

Hoffman, the third seed, was out for good at 1:52 by top-seeded Matthew Gaiser, a junior from Alexander (Section V).

Barnes was in an early quagmire — no points and hardly any action.

"Just a steady match for him, though," Ballston Spa coach Harvey Staulters said. "He's a cool customer. Tyler stays within himself, doesn't panic, and wrestles the match he's supposed to wrestle."

Barnes had a late 3-2 lead, then secured a final takedown with about 40 seconds left. He had fallen in the quarterfinals the past two years.

Barnes had his arm raised by the referee, then threw on his fashionable black glasses — he really can't see into the crowd without them — as spectators craned to see where exactly he was going.

Barnes was the only champion to make such an exit.

"He just keeps distancing himself from the other kids," Staulters said.