SAN JOSE—Paul Marner has been hearing it almost from the moment his son began dominating minor hockey games around the GTA.“We’d stand there and listen to people constantly talk about Mitch’s size. ‘Oh my God, he’s... 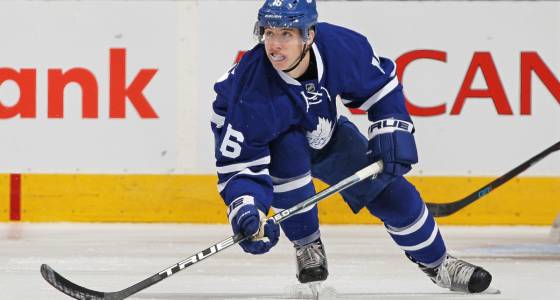 SAN JOSE—Paul Marner has been hearing it almost from the moment his son began dominating minor hockey games around the GTA.

“We’d stand there and listen to people constantly talk about Mitch’s size. ‘Oh my God, he’s way too small.’ ‘Oh my God, he’s going to get killed,’ ” Paul Marner was saying recently. “But as a parent, maybe you’re too close to it. At the time we never thought he was that small.”

Upon more recent review — looking back at video of Mitch’s rise through the ranks of the Greater Toronto Hockey League en route to starring for the Maple Leafs during a remarkable rookie year — a father has come to see things differently.

“I pulled out a game tape the other day from peewee and I thought to myself, ‘Oh my God, he looks like someone’s little brother on the ice.’ ”

Little Mitch, at the time, was playing peewee against boys a year older. At the time Michael Dal Colle, a longtime minor-hockey teammate of Marner’s who went on to be taken fifth overall by the New York Islanders in the 2014 NHL draft, was about 13 years old, standing five-foot-eight and 160 pounds, Paul Marner said. Mitch, at the same time, was four-foot-seven and about 85 pounds. Body-checking was permitted.

“Every coach we played against was sending guys out to kill him. So his whole life, Mitch has dealt with that,” Paul Marner said. “And right now, even though there’s some huge guys in the NHL, I think he’s at the least size disadvantage he’s probably ever had his whole life.”

The conversation was timely. On Tuesday Mitch Marner was preparing to make his return to the Maple Leafs lineup after a five-game absence due to a shoulder injury. The Maple Leafs, slated to visit the San Jose Sharks at the SAP Center, were also expected to welcome Brian Boyle, the six-foot-six centreman who was acquired in a Monday trade from the Tampa Bay Lightning in exchange for a 2017 second-round pick and Byron Froese.

And if Boyle’s acquisition was met with exuberance in the Maple Leafs dressing room — “It goes to show they have a lot of faith in this group here,” said veteran forward James van Riemsdyk, speaking of Leafs management — so, too, was Marner’s reinsertion after a 13-day break from game action. He was the team’s leading point producer when he went down.

“It was eating him up inside to be out of the lineup — it’s been hard on him,” said Matt Martin, the Leafs forward. “But for a guy like that, you just want to make sure he’s taking care of himself.”

Paul Marner said questions about Mitch’s long-term durability have always gone hand in hand with concerns about his skimpy frame. A couple of years back, when Marner was a draft-eligible 17-year-old racking up a nightly average of two points a game for the OHL’s London Knights, scouts flocked to see him play against the hard-hitting Oshawa Generals, then coached by Leafs assistant D.J. Smith. The fact that Marner suffered a fracture in his elbow that night — this on a hit from behind that earned Oshawa’s Will Petschenig an eight-game suspension — didn’t exactly end the conversation about his chances of weathering the professional grind.

“It’s almost a stigma that won’t go away,” Paul Marner said of concerns about the implications of Marner’s size. “But it doesn’t make a lot of sense.”

The hockey father, to that point, said he can count on one hand the instances in which his son has been hurt on a rink. There was a dirty slash that broke Mitch’s arm around age 10. There was a hip flexor issue that kept him out a few weeks when he was about 15. And then there was a case of whiplash suffered as a Knight in 2015, this after Erie’s Mason Marchment cuffed Marner with a stick to the jaw. Marchment was suspended 10 games.

Cheap shots happen, and anyone can get injured. But it’s worth noting the injury that kept Marner out of the lineup these past couple of weeks wasn’t a matter of a bigger player preying on the small-framed Maple Leaf. It was Marner who initiated the contact with Columbus’s Boone Jenner that ended with the Maple Leaf crashing awkwardly into the boards.

“Durability-wise, I’ve never been worried about it. He’s always got his head up,” Paul Marner said. “You look at the amount of time he’s played — how much he was on the ice in minor hockey and in the OHL, and how much he has the puck in the NHL — I think he’s pretty durable.”

It’s a compelling enough case. Mitch, for his part, has long been blase about concerns about his size.

“You can’t do anything about your body,” Marner said. “I’ve always been in this situation.”

The situation, mind you, is improving. While Mitch weighed in at about 160 pounds when the Leafs drafted him fourth overall in 2015, he has since put on weight. Exactly how much weight? Well, Mitch can be coy about this subject.

Toronto’s No. 16, in contrast, is downright forceful about his height.

“I’m six feet,” he recently said in a declaration that drew guffaws around the dressing room. “Nobody believes that.”

Mitch, who doesn’t turn 20 until May, said he’s of the belief that he’s still growing. He said his older brother, Chris, had a late spurt around age 20 or 21 and now stands about six-foot-two. And there’s height on mother Bonnie’s side of the family. She’s five-foot-10. Paul Marner, who’s also about five-foot-10, said lately he finds himself looking up at his youngest son, whom he figures can easily add another 20 pounds of muscle to his frame before he’s fully formed.

This is another claim that doesn’t go over well in the Maple Leafs room.

“He tells me he’s still growing all the time,” Martin said, rolling his eyes. “Good luck with that one. He thinks he’s going to be 6-3. I know he’s young. But he’s not that young.”

Mitch Marner shrugged and smiled: “If I grow or not, I’m happy how I am now.”

If how he is now is healthy and back in the lineup as Toronto’s push for the playoffs continues, there’s a fan base that likes him just fine, too.