The list is long and not illustrious and leads to a fairly obvious conclusion: Eli Manning will soon be the best quarterback Brandon Marshall ever has played with.Marshall agreed Wednesday to sign a two-year, $12 million deal with the Giants.In 167 games... 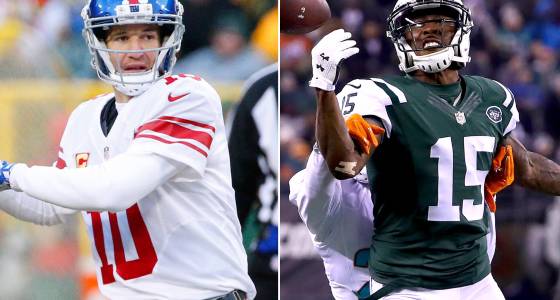 The list is long and not illustrious and leads to a fairly obvious conclusion: Eli Manning will soon be the best quarterback Brandon Marshall ever has played with.

Marshall agreed Wednesday to sign a two-year, $12 million deal with the Giants.

In 167 games across 11 seasons and four teams, Marshall has amassed 941 receptions for 12,061 yards and 82 touchdowns. He is a six-time Pro Bowler and the only player in NFL history with six seasons of 100 or more catches.

Through it all, Marshall accumulated stats with an array of quarterbacks who pale in comparison to Manning. Marshall caught passes from Jake Plummer and Jay Cutler with the Broncos, Chad Henne and Matt Moore with the Dolphins and Cutler and Josh McCown with the Bears. It was Ryan Fitzpatrick in 2015 with the Jets; Fitzpatrick, Geno Smith and Bryce Petty in 2016.

Marshall, soon to be 33, is coming off a subpar season with the Jets with 59 catches for 788 yards and only three touchdowns. The Giants are banking Marshall’s stark reduction in production was more the result of shoddy quarterback play from Fitzpatrick, Smith and Petty than signs of Marshall’s deterioration. His grade of 71.7 as a receiver by Pro Football Focus was the lowest since his rookie season. He caught only 48.8 percent of the passes thrown his way – the lowest percentage of all receivers with at least 65 targets. Marshall only dropped seven passes, though, and he dominated (four receptions for 89 yards and one touchdown) when shadowed all game by Seattle’s Richard Sherman.