The league of living legends takes (perhaps) its final tour

On Jan. 31, I was in Tallahassee, Florida, preparing for national signing day and walking toward the football stadium when I heard it.Tink! Tink! Tink!So I slipped in through the gates and looked out over Mike Martin Field, where I found Mike Martin Jr. leading... 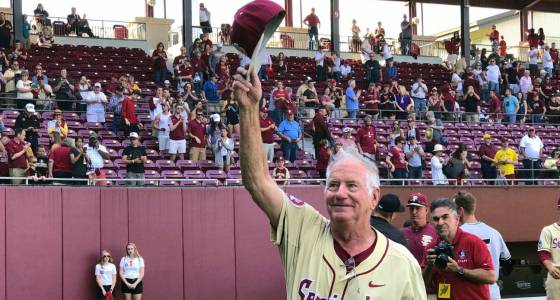 On Jan. 31, I was in Tallahassee, Florida, preparing for national signing day and walking toward the football stadium when I heard it.

So I slipped in through the gates and looked out over Mike Martin Field, where I found Mike Martin Jr. leading the Florida State baseball team through a practice session ... but there was no Mike Martin Sr. It turned out the head coach they call "11," aka the guy ranked second on college baseball's all-time wins list, had to slip away for a preseason fundraising obligation.

"It feels weird, him not being here, right?" A fellow onlooker said to me. "Even just for a practice."

Heck yeah, it did! And though no one wants to say it aloud, speculation runs rampant about when Martin might hang up his spikes, especially as the all-time wins record grows closer. On Sunday, he earned his 1,900th victory, 75 shy of the top spot. For a man who has averaged 50 wins per season over his 38 seasons, next May feels like a good time to plan a celebration.

On Feb. 21, I was in the stands in DeLand, Florida, as Stetson University hosted Siena (no, not the game when the leftfielder ran through the wall; I was two days late for that one). The Hatters earned their first win of 2017 and also their first victory in 37 years with a new head coach. Pete Dunn, head coach since 1980, abruptly stepped down in December, citing lingering knee issues as the reason for cutting short his original plan to retire after this season. His 1,312 victories are ranked 20th in Division I history. He's still on board as head coach emeritus. Like Martin, he'll be doing some fundraising.

"'Emeritus,' I think, is Latin for 'old,'" quipped Hall of Fame member Dunn, who turns 69 this summer.

Nearly 3,000 miles away, Stanford is preparing to say goodbye to its in-house living legend. On Thursday night the Cardinal will be host their 41st and final home opener with Mark Marquess sitting at the end of the bench. Actually, the guy they call "9" never sits at the end of the bench, at least never for very long. The perpetually youthful coach, who turns 70 on March 24, will pace the floor of the home dugout at Sunken Diamond throughout 2017, which he has already said will be his final season at the helm. His 1,586 victories are ranked fifth on the Division I list.

Throw in Gene Stephenson's (fourth; 1,768) 2013 dismissal at Wichita State and a whopping seven of the 16 winningest coaches in college baseball history will have ended their careers over a six-year span, including four of the top five. Martin's retirement, whenever it happens, will make it a clean sweep of that top five. And have we mentioned that Rice's Wayne Graham (43rd; 1,114) will turn 81 on April 6?

The point is this. Never in the history of college baseball has there been a coaching transition such as the one the game finds itself in the midst of at right this moment. No one knows what's next. Not even the men doing the transitioning.

"Honestly, it scares me a little bit when I think about it, so I try not to think about it," Marquess confessed last fall as he kicked off his last year of autumn tune-ups. Like Martin at FSU and Dunn at Stetson, Marquess isn't merely the coach. He's also a former player. With the exception of a few years in the minor leagues, he has worn the Stanford uniform ever since he first arrived on campus as a freshman in 1965. "If I start thinking about that, how the rhythm of my life is going to change for the first time since I was a teenager ... see? I'm already thinking about it too much right now. I have too much to focus on in the here and now to worry about what's on the other side of June."

Ah yes, June. That's when the College World Series is played. Marquess has led his alma mater to Omaha 14 times, winning back-to-back titles in 1987-88. But the Cardinal haven't been back since 2008. Last year they failed to make the NCAA tournament for the second straight season, despite a strong start and looking like a midseason shoo-in for the postseason. The last time that happened was right after he'd first been promoted to head coach in the late '70s.

Stanford chose to do for Marquess this season what Texas chose not to do for Garrido. It honored the final year of his contract to give him one more chance to go out as a winner.

"He deserves what I guess you would call a victory lap and you will not find a single person who has played for him or even against him who doesn't believe he deserves that," Dave Esquer said of his mentor last April. The Cal head coach played for Marquess on the '97 CWS title team. He took the time to gush over his former coach even after he had just ripped Esquer's heart out in a midweek, late-night thriller in Berkeley. "The great coaches of his generation are the guys who took this sport and turned it into what it is today. Anyone who makes a living in college baseball or is just a fan, they owe them all for what they've done."

And perhaps even what they are still to do.

Martin's Florida State team was an easy preseason top 5 pick, with Stanford in the top 25. You'd better watch now. You'd better take a moment and catch the 2017 legends show, because the ones who still remain will be here for a limited time only.

No one knows that better than the legends themselves.