Editor's note: NFL.com analyst and former NFL scout Bucky Brooks reveals "the book on" some of the 2017 NFL Draft's most polarizing prospects. This is the fourth in a series of scouting reports that will run leading up to the NFL Scouting Combine... 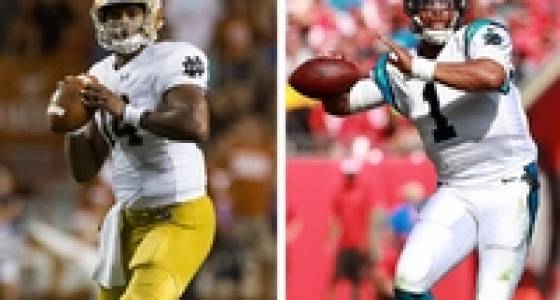 Editor's note: NFL.com analyst and former NFL scout Bucky Brooks reveals "the book on" some of the 2017 NFL Draft's most polarizing prospects. This is the fourth in a series of scouting reports that will run leading up to the NFL Scouting Combine (March 3-6 on NFL Network).

It's amazing how quickly some prospects can go from the top of the mountain to the pits of the valley. That's certainly the case with DeShone Kizer after watching him earn glowing recommendations from scouts following a magnificent performance against Texas in the season opener. He dazzled evaluators with a spectacular six-touchdown effort that showcased his skills as a dual-threat playmaker with great size. Scouts raved about his athleticism and running skills. They were blown away by his exceptional arm talent, too.

The fanfare quickly subsided, however, after Kizer struggled over the last half of the season like a battered fighter at the end of a 15-round fight. He looked nothing like the ultra-confident quarterback that teased scouts with his talents in the season opener and appeared on the fast track to the No. 1 pick early in the season. With rumors swirling over his loss of confidence and questionable resiliency, scouts have seemingly backed away from the Notre Dame star as a potential franchise quarterback. With Kizer attempting to re-write the narrative surrounding his game and potential with a strong series of workouts over the next few weeks, I thought I would take a little time to break down his game and potential as a field general. Here is the book on Kizer.

"I like the kid. I think you have to go back and look at the 2015 tape to fully appreciate him. He can make all of the throws and he's athletic. Plus, he has won some big games during his time there. I know it got a little sideways for him (in 2016), but he can play. I believe he is one of the top three in this class." -- AFC college scouting director

"Kizer scares me to death. I see the athleticism and arm talent, but I wonder if he can take hard coaching. Things went downhill in a hurry at Notre Dame. I need to find out why." -- AFC vice president of player personnel

"He has everything that you want, but you worry about the Notre Dame situation. Why did it fall off the rails for him down the stretch?" -- AFC scout

Kizer has a chance to be the new prototype at the position as a big, athletic passer with A-plus arm talent. Measuring 6-foot-4, 230 pounds with nimble feet and deceptive speed, the Notre Dame standout can execute all of the flashy QB runs (zone-read, quarterback draws and powers) that are creeping into the pro game. He's also a polished pocket passer who's capable of making every throw in the book. Kizer's ability to thrive in both worlds could make him an intriguing prospect for an imaginative offensive coordinator intent on using the quarterback to challenge the defense in a variety of ways.

Kizer is a refined dropback passer with outstanding footwork and mechanics. He consistently sets up and delivers from a balanced platform at the top of his drops. When he's playing at a high level, his eyes and feet are working in unison and the ball comes out of his hand like a rocket. While the zip and velocity on Kizer's throws are definitely "wow" worthy, it's the ball placement and accuracy that stands out on tape.

He routinely hits his intended receivers in the face mask, which is the ideal location for most throws, particularly on target routes (receiver is stationary or working back to the quarterback) or crossers between the hashes. On deep passes, Kizer drops the ball down the chimney with good touch and placement. He repeatedly drops dimes on post-routes but also shows excellent touch on go-routes and back-shoulder fades along the boundary.

Kizer also throws with excellent timing and anticipation. From delivering the deep comeback well before the receiver is coming out of the break to firing seam routes between multiple defenders at intermediate depth, Kizer has already mastered the skill of throwing receivers open, and astute quarterback coaches will appreciate the subtleties in his game as a pocket passer.

It's hard to teach young quarterbacks to let the ball go early before the receiver reaches his designated spot, but Kizer repeatedly shows this skill on tape and it could help him grow from being a good college quarterback to a great NFL passer.

From a footwork standpoint, Kizer shows great agility, balance and body control as a passer inside and outside of the pocket. Within the tackle-to-tackle box, he makes subtle movements to escape the rush while keeping his eyes down the field. He climbs the pocket to avoid pressure and uses the natural hitches to refocus his eyes on the next receiver in the progression. This is graduate-level quarterback play that extends beyond the "pick-and-stick" throwing mehanics displayed by most spread quarterbacks.

On the move, Kizer delivers lasers while working to his right or left on rollouts, sprints and bootlegs. He delivers the ball on time and typically places the ball on target to his intended receiver. With a number of teams incorporating more movement-based throws into their game plans, Kizer's athleticism and movement skills will make him an intriguing option.

Against the blitz, Kizer shows courage and determination, standing tall with rushers in close proximity. He doesn't flinch or wilt under the pressure, which speaks volumes about his grit within the pocket. Considering the beating he took behind a weakened offensive line, it's hard to question his toughness or effectiveness against the blitz.

From a critical standpoint, Kizer's disappointing play down the stretch last season will raise concerns about his confidence and competitive toughness. He appeared to have issues with Brian Kelly's coaching style and scouts will question whether he can cut the mustard as an NFL starter given the pressures associated with playing the position.

On the field, Kizer needs to show better leadership in adverse situations. Sure, he delivered some notable wins on late-game drives during his first season as a starter (2015) but he was surrounded by several NFL players and they made life easier on him as a young field general. In 2016, Kizer failed to guide his squad to the winner's circle consistently and that will lead to some raised eyebrows from scouts. Granted, they will take his supporting cast into account, but quarterbacks are judged on their ability to win games, and Notre Dame's 4-8 mark will leave a stain on Kizer's resume.

Overall, Kizer is a "wow" talent with the physical tools to be a high-level NFL starter for a franchise. He can make all of the throws and adds a dimension to an offense with his athleticism/running skills. Considering how the league is gradually accommodating dual-threat quarterbacks, particularly those with polished passing skills, Kizer could be the new prototype at the position. That statement might sound crazy based on his dramatic decline at the end of the season, but it's hard to find a 6-foot-4, 230-pound passer with his talent and potential.

I know the comparison will raise eyebrows based on the former NFL MVP's remarkable talents, but Kizer is a big, athletic passer with comparable arm talent and movement skills. When he is playing his game with supreme confidence, he can mirror some of the production that Newton displayed during his MVP campaign. Whether it's the red zone rushes (18 career rushing touchdowns at Notre Dame) or the splashy throws to every part of the field, Kizer has the tools to change the game like the Panthers' star. With the right coach whispering a positive message in his ear, Kizer could blossom into the crown jewel of the 2017 class.

The 2017 QB class is viewed as one of the most polarizing groups in recent history. Teams are having a tough time sorting out the talent at the top, particularly Kizer and his unique game. I believe he's an elite talent worthy of consideration among the first 20 picks, but he will probably come off the board between the bottom of the first round and the middle of the second round on draft weekend.

Teams like the Arizona Cardinals, Kansas City Chiefs, New York Giants and Chicago Bears would be a nice destination for him based on his game and their respective schemes. If I had to choose a dream matchup for him, I would pick the Cardinals and Bruce Arians. Although the Cardinals' head coach is a hard-nosed teacher, he's also a terrific quarterback developer and he understands how to maximize their skills. Based on his work with Ben Roethlisberger in Pittsburgh, I believe he could turn Kizer into an offensive weapon as a flamethrower from the pocket.