Teary finale for Anya, Wolfpack in home loss to Virginia

They’ll always have LSU.No matter how disappointed Mark Gottfried has been in senior forward BeeJay Anya this season, the N.C. State coach and the Wolfpack big man will always have Anya’s improbable hook shot to beat the Tigers in the first round of the... 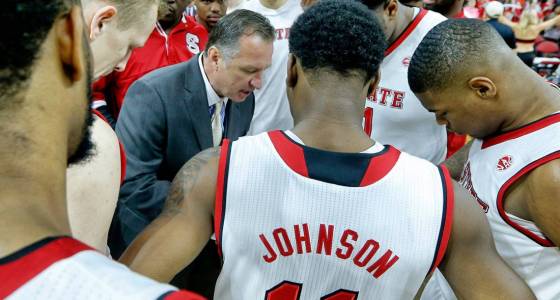 No matter how disappointed Mark Gottfried has been in senior forward BeeJay Anya this season, the N.C. State coach and the Wolfpack big man will always have Anya’s improbable hook shot to beat the Tigers in the first round of the 2015 NCAA tournament.

That was only two years ago but it seemed impossibly longer on Saturday as N.C. State closed out its disappointing home schedule with a 70-55 loss to No. 18 Virginia.

The last two weeks have been surreal for N.C. State, with Gottfried getting fired the day after a 97-73 loss to North Carolina on Feb. 15 but choosing to coach out the string.

The Wolfpack knocked off Georgia Tech on Tuesday night but couldn’t conjure up another league win against UVA coach Tony Bennett, who improved to 10-2 against N.C. State

The last home game for any team is always emotional, but Saturday’s had a different tinge of nostalgia for Anya, guard Terry Henderson and walk-on Chris Brickhouse.

Henderson could apply for a sixth-year waiver from the NCAA and be back next season. Brickhouse, who is probably in the best physical shape of anyone on the roster, might even find minutes with a new coach next season if he were to return.

But it was definitely the home finale for Anya whose fluctuating highs and lows are a microcosm of Gottfried’s tenure. Tears streamed down Anya’s face as Henderson and his father led him out to the court to be recognized on Senior Day. Anya’s mom, Maryanne, joined them on the court.

“Growing up I had three sisters, I never had any brothers,” Anya said. “Having them has been like having brothers. It has been great being with them for four years.”

Anya got his first start in 2017 on Saturday and played nine minutes. He missed his only shot but did block one shot, to pad his school-record total (243) for a career.

Freshman Dennis Smith Jr., in what will likely be his last home game at N.C. State, led the Wolfpack with 13 points. The NBA awaits Smith, a projected lottery pick.

Who knows what Anya’s future will be. His past produced some great wins for Gottfried, but it’s impossible not to wonder how much better N.C. State’s woeful defense could have been this season with a leaner, fit Anya in the middle. Anya was a force in the back of State’s zone with seven blocks in a 67-55 win over Tennessee State on Dec. 10 but it was a one-off performance.

There were good times with Anya. He was a key defensive cog as a sophomore in road wins over ranked Louisville and UNC teams. His lefty-hook shot, from about 10 feet, with the clock running down and the Wolfpack down 65-64 capped an incredible comeback against LSU in the Round of 64 in the NCAA tournament.

The next game, a 71-68 upset of No. 1-seeded Villanova, was the apex of Gottfried’s tenure. But Anya’s weight has been a source of frustration ever since.

The coach finally suspended Anya for one game, a 95-71 loss at Florida State on Feb. 8, after the two had been at odds for much of the season to the point.

“We’ve had an up-and-down relationship my four years here,” Anya said in a moment of diplomacy.

Anya said didn’t know he was going to get his first start since December. He did not play at all the past two games, or in four of the past eight, at Gottfried’s discretion.

“It was good he did that,” Anya said of the start. “It showed that he cared. It showed he appreciated the things I’ve done for him, and I appreciate the things he has done for me, as well.”

Gottfried said he thought starting Anya was the right thing to do.

“I’m not a guy who usually does all that for Senior Day, but I think BeeJay is different,” Gottfried said.

There is a difference between the business side and the personal side of the coach-player relationship, Gottfried said.

The two worked it out on Saturday to have a proper goodbye, even if it wasn’t the one either envisioned when the season started.