DAYTONA BEACH — It was back to school for Aric Almirola.3 Weeks Ago6 Days Ago2 Weeks AgoOn Tuesday, the Tampa-raised NASCAR driver took time off from preparing for the Daytona 500 to spend some time in his hometown with students at Pierce Middle School,... 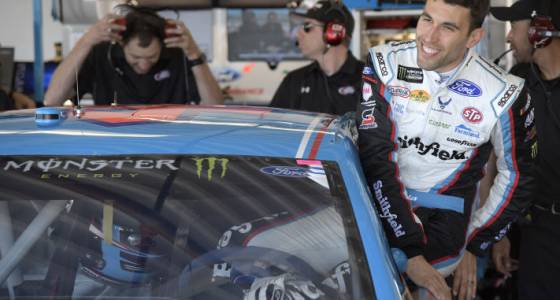 DAYTONA BEACH — It was back to school for Aric Almirola.

On Tuesday, the Tampa-raised NASCAR driver took time off from preparing for the Daytona 500 to spend some time in his hometown with students at Pierce Middle School, which his parents attended as students.

"That's where they met," Almirola said. "Some extra meaning for me."

He loves talking to kids, encouraging them.

"I tell them any dream is possible. I'm a kid from small Latino community on the west side of Tampa and I loved race cars. And here I am, 15 years after middle school, living the American dream, driving a race car for Richard Petty. I just tell them to have a dream and don't get caught up in being the cool kid in school."

He might have mentioned that there are bumps in the road in any dream.

The 32-year-old had a rough 2016 driving the iconic No. 43 car for Richard Petty Motorsports, finishing a career-worst 26th in points with only one top-10 run. This after Almirola made the Chase in 2014 and finished just out of the Chase in 2016.

It never hurts to come back to Daytona.

"Daytona has been a good place for us," Almirola said. "It's been a great place for Richard Petty. It's been an extremely good to me. I won my first Cup race here. I won a Xfinity race here last year. I'm familiar with where Victory Lane is here at Daytona, and I'd like nothing more than to visit that again for the Daytona 500."

"Last year was disappointing. We had a lot of high hopes going into the season, where we had made the Chase in 2014 and in 2015 we ran extremely well and just missed the Chase. … For last year to go the way it did, it cost us all by surprise and that led to even more of the disappointment. That was a huge letdown for us. It was a wakeup call."

But there is always Daytona, where Almirola raced karts as a kid, where he had his only win at his game's top rung when he took the summer race in 2014. Last summer, he won the summer Xfinity race at Daytona.

"This is like my second home," Almirola said. "I have so many childhood memories of coming here."

"That was really fun. We've had an opportunity to go to some of these schools and having the opportunity to talk the kids. They're so impressionable. In junior high and middle school, they're at such a pivotal point in their lives."

Back to Daytona and winning the 500 …

"I can see it," Almirola said. "I really can. I can see us going to Victory Lane here. Just the other day, my little girl, Abby, she's 3, I told her I was leaving for Daytona. She told me, 'Oh, Daddy, I hope you go so fast we go to Victory Lane and get soaking wet again.' We celebrated when we won in July. So I've got some pressure. She's counting on me so she can get soaked again."