Stunned Yankee: When will base-runners learn about Gary Sanchez?

TAMPA — Gary Sanchez hasn’t gotten a hit yet this spring, but he managed to pick up Sunday where he left off in another way.The 24-year-old catcher, who threw out 41 percent of those who tried to steal a base against him as a rookie, gunned down two more... 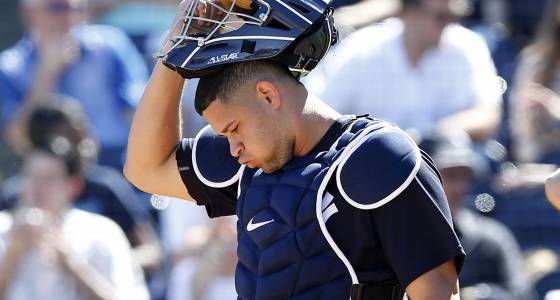 TAMPA — Gary Sanchez hasn’t gotten a hit yet this spring, but he managed to pick up Sunday where he left off in another way.

The 24-year-old catcher, who threw out 41 percent of those who tried to steal a base against him as a rookie, gunned down two more in a 7-2 win over the Blue Jays at Steinbrenner Field.

So while Sanchez is still looking for his first hit of spring training after going 0-for-6 with a strikeout in two games, he has still been a force behind the plate.

“He can throw,” manager Joe Girardi said. “His arm strength is special. It changes the complexion of the game. Pitchers don’t have to worry as much. These aren’t arms you see every day.”

First, it was Jon Berti, followed by Ezequiel Carrera — both with Johnny Barbato on the mound. And the one Blue Jay who did make it to second, Anthony Alford, barely got there in time, according to Castro.

“It was a one-hop to Didi [Gregorius] that would have been reviewable in the season,” the second baseman said. The other two, as Castro pointed out, were “not even close.”

“They get good jump and they are [still] out by two feet,” Castro said. “It’s pretty awesome. They didn’t say anything. They know they’re out by a lot, so they just go back to the dugout.”

Both Girardi and Brett Gardner pointed out why Toronto might have been so aggressive in testing Sanchez.

“You see who their first-base coach is,” Gardner said of Tim Raines, whom Girardi referred to as “the stolen-base guru.”

Castro said Sanchez is the best throwing catcher he has played with and the only one he compared him to was Yadier Molina of the Cardinals from their days in the NL Central.

“Everybody talks about his hitting, but he made nice plays catching last year,” Castro said. “He’s pretty good behind the plate, too.”

An ugly spring last year, when he went 2-for-22 with no homers, forced Sanchez back to Triple-A Scranton/Wilkes-Barre for much of the year. This season, he should be more familiar with the Yankees’ pitching staff on Opening Day than he was for the last two months of 2016.

Asked about the secret to limiting base-stealers, Sanchez didn’t have much to say.

“The thing is, you’ve got to be ready when there’s a runner on first,” he said through an interpreter.

And while the fans would surely rather see him homer, Sanchez said he put a similar importance on his defense.

“I feel the same way,” Sanchez said of hitting homers and throwing runners out. “It helps the team win. It’s exciting.”

Of course, his arm isn’t what made Sanchez perhaps the most talked-about newcomer in the American League last season.

Instead, it was the record pace in which he hit home runs at the beginning of his career.

But if he’s going to become the player the Yankees are counting on him to be, prowess at the plate won’t be enough by itself.

As the Blue Jays found out again Sunday, he is prepared to be more than a one-dimensional player.

Now, all he has to do is find his home run swing.