Let’s get this out of the way: No team with two full-time starters at least 42 years old in its rotation has ever made the playoffs.Then again, only seven teams have even given at least one start to two pitchers that old. Yet here are the 2017 Atlanta... 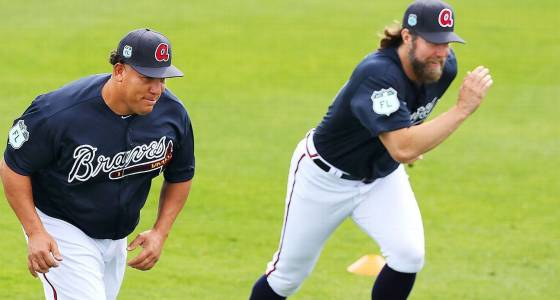 Let’s get this out of the way: No team with two full-time starters at least 42 years old in its rotation has ever made the playoffs.

Then again, only seven teams have even given at least one start to two pitchers that old. Yet here are the 2017 Atlanta Braves, counting on Bartolo Colon and R.A. Dickey to anchor their rotation alongside Julio Teheran. Colon turns 44 in May, and Dickey is 42, making the Braves the first team since the 2009 Red Sox with two starters that old, assuming both make it to Opening Day in good health.

Those two are the elder statesmen of the Braves’ intriguing island of misfit toys that make them one of the most interesting -- and unpredictable -- teams of 2017. It’s a weird mix of veterans that other teams didn’t really want, supplementing foundation building blocks such as Freddie Freeman, Dansby Swanson, underrated Ender Inciarte and Teheran, plus a blossoming farm system that many consider the deepest in the minors.

With so few players on their 40-man roster actually in the primes of their careers, the key for playoff contention -- and the front-office duo of John Hart and John Coppolella have hinted that’s possible -- is what they get from Colon and Dickey and this group of 30-somethings:

Matt Kemp: Unwanted by the Dodgers, unwanted by the Padres, Kemp wrote an essay for The Players Tribune website after his trade to the Braves last summer that basically admitted he hadn’t given it his all in recent seasons:

I let a big contract, the Hollywood lifestyle, injuries and bad relationships tarnish the reputation I had worked so hard to establish. Sadly, I gained a reputation for being selfish, lazy and a bad teammate. While I may not agree with all the criticism I received in the past few years -- and while I believe that a lot of it was unmerited -- I take full responsibility for my shortcomings. And I promise you, Atlanta: Those days are gone.

For some reason, the comments received little attention, in part because he was going from one bad team to another, but also signifying how far Kemp had fallen off the radar since 2011, when he was runner-up in the MVP voting. Perhaps looking at the trade as a chance to start over, Kemp hit .280/.336/.519 in 56 games with the Braves. He showed up to spring training a few days early and an estimated 15-20 pounds lighter. Whether that gives him more mobility in the field remains to be seen. His defensive metrics have gone from bad to awful the past few seasons.

Brandon Phillips: After 11 seasons with the Reds, Phillips finally acquiesced to a trade, waving the 10-and-5 rights he used last offseason to block a couple of trades. What does he have to offer at 36 years old? Though he hit .291 with 11 home runs in 2016, he hasn’t had an OPS+ above the league average since 2011. His minus-7 Defensive Runs Saved marked his first season below average since his first season with the Reds in 2006, so he might have lost a step in the field as well.

Jaime Garcia: The third veteran starter brought in this offseason, Garcia has been plagued by injuries during his career but made 30 starts for the Cardinals in 2016, the first time he reached that number since 2011. He had an ERA under 3.00 through mid-May for the Cardinals, but an ugly 5.41 mark the rest of the season.

Kurt Suzuki: Tyler Flowers had a decent year at the plate sharing time with A.J. Pierzynski and is regarded as a good pitch-framer, but he also threw out just three of 63 runners attempting to steal. To replace Pierzynski, the Braves signed Suzuki, who is generally considered a poor pitch-framer and also owns a .298 OBP over the past two seasons. I guess he brings veteran presence. Or something.

Nick Markakis: He’s in his third season with the Braves, and his most positive attribute these days is durability. He was one of those guys who took advantage of the league-wide power surge, increasing his home run total from three to 13, but he still slugged less than .400 as the Braves ranked 24th in the majors in slugging percentage from right field. He’s slow on the bases and no longer a Gold Glove-caliber right fielder.

Jim Johnson: He should begin the season as the closer again after recording more strikeouts than innings pitched for the first time in his career, but he has been inconsistent in recent seasons. He was run out of Baltimore after having too many blown saves in 2013 and being just plain awful in 2014.

Braves management views Colon and Dickey as a bridge to their prospects who need more time in the minors, but they were also brought in because the Braves' rotation had too many holes.

The Braves ran through an MLB-high 16 starting pitchers in 2016. Subtract the three starters who made at least 20 starts, and the other 13 combined for a 5.73 ERA. That’s why Colon, who had a 3.43 ERA in 2016, and Dickey, who had a 4.46 ERA, are viewed as significant upgrades if they simply match their 2016 performance and workload.

The truth is, however, that the Braves needed those two and Garcia because the first wave of pitching prospects acquired after the teardown began in 2014 has yet to produce any significant results at the major league level. From 2014 to 2016, the Braves acquired 16 pitching prospects in trading players such as Jason Heyward, Justin Upton, Craig Kimbrel, Evan Gattis and Andrelton Simmons. Among those prospects, Mike Foltynewicz finally showed some promise last season and Matt Wisler remains a rotation candidate, but they’re still waiting on players such as Sean Newcomb and Aaron Blair.

The next wave of homegrown arms -- Kolby Allard, Patrick Weigel, Mike Soroka and Ian Anderson -- is also promising but unlikely to make an impact in the majors until 2018 or 2019.

Thus, the bridge. Will the bridge lead to anywhere in 2017? I have doubts. The front office is putting a lot of stake in the second-half performance of the offense, which ranked second in the majors in runs per game over the final two months, but there are going to be OBP issues at several positions, including catcher, second base, third base and left field.

"We have a full system now. The major league club had a good second half," Hart told the Atlanta Journal-Constitution in October. "We have a new ballpark. This has all happened in short order. Instead of this being a five-year thing, we’re thinking it’s going to be quicker."

The computer projections aren’t as optimistic. FanGraphs sees a 73-89 team; Baseball Prospectus sees a 76-86 team. The Braves obviously see more in Kemp and Markakis than the computers; maybe the power-armed Foltynewicz makes The Leap. Swanson could easily outperform his .256/.322/.399 FanGraphs projection.

I do know this: After having consecutive 90-loss seasons for the first time since the dark days of the late 1980s, the Braves will be much more exciting as they move from the decaying, rusted-out Turner Field, built way back in 1996, into their new Cobb County ballpark, located in the suburbs 10 miles northwest of downtown. Attendance, which averaged more than 40,000 per game in the late '90s but dipped under 25,000 per game the past two seasons, will surely climb in the new park.

As fun as it will be to see Colon firing those 87 mph fastballs down the middle of the plate and Dickey fluttering up those knuckleballs, though, I just don’t think the Braves are as far along that timeline as Hart believes.