Stevie Sunshine's perfect solution for dealing with the Bulls

You can't trust the Bulls to play the way they should. I mean, a respectable and healthy team doesn’t lose at home to sub-.500 Nuggets after needing overtime at home to squeak past the awful Suns.You can't trust Bulls management wonks to do what they... 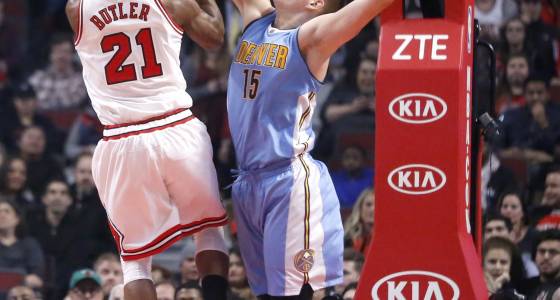 You can't trust the Bulls to play the way they should. I mean, a respectable and healthy team doesn’t lose at home to sub-.500 Nuggets after needing overtime at home to squeak past the awful Suns.

You can't trust Bulls management wonks to do what they should, either. Look, the Rajon Rondo and Dwyane Wade signings remain as confusing as general manager Gar Forman’s tripe last year that 36-year-old Pau Gasol was a big part of the Bulls’ future.

And don’t even bring up the regularly scheduled missed opportunities to turn Jimmy Butler into a credible rebuild.

You only get aggravated by management wonks selling the unworkable hooey of rebuilding while trying to get younger and more athletic.

But wait. There’s more. They don’t want to guard anyone for long stretches and they don’t realize they have a coach.

The Bulls haven’t earned the emotional investment, but they’ve gotten some of it, anyway, which makes losses such as Tuesday night’s against a Nuggets team with a worse record so maddening.

But lucky for everybody, Stevie Sunshine is here with a perfect solution for looking at the Bulls the rest of the season:

View them as an expansion team.

The bar is set at zero. No expectations. Ding! Ding! Ding! A winner of an idea for watching this bunch that loses so many games in so many bad and stupid ways.

I’d only get angry if I realized that Bulls wonks planned this roster of misfit toys. It’s less stressful to think that the league made available some of its worst players in an expansion draft and that’s all the Bulls had to choose from to play this season.

Make like they traded a first-round pick for Butler to bring in a credible show piece. It’s easier than thinking they spent first-round picks on Denzel Valentine and Bobby Portis and Doug McDermott and called Niko Mirotic a starter at some point, and you see what I mean?

Expansion teams go bad at the worst times. Against the Nuggets, the Bulls had a one-point lead with 3:08 remaining in the third quarter, and then were strafed 47-28 on their home court.

In all, they were outscored 70-48 in the second half the way any self-disrespecting expansion team would be.

Thinking of this season’s Bulls team as a first-year operation is the only way to justify that roster and not risk angina.

Hey, if Bulls ownership wants to delude itself, then so can I.

This way, you don’t have to get mad when players refuse to act and respond like professionals. Expansion teams never seem capable of that. They seem capable of what the Bulls are giving the franchise, or what they’re not giving it.

Treating the Bulls as an expansion team might be the only solution short of washing out your eyes with battery acid.

I’m early in my re-education program, and you’re welcome to try it with me. You know, like workout buddies.

Oh, but wait, we know how much those gym memberships get used, right?

And so, like that, we’ll remember that some Teflon-covered ownership pets have zero idea how to fix the mess that has resulted in zero championships in a generation.