The Pittsburgh Steelers and Antonio Brown have reached agreement on a four-year, $68 million deal that makes him the highest-paid wide receiver in the NFL, sources told ESPN's Adam Schefter.He is now tied to the Steelers through the 2021 season. He tweeted... 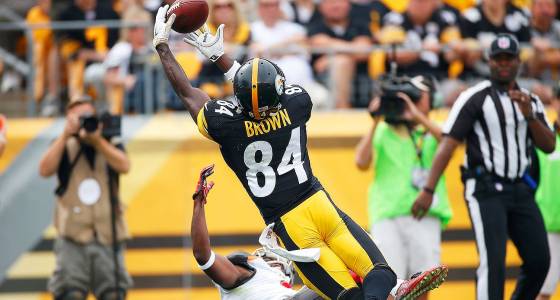 The Pittsburgh Steelers and Antonio Brown have reached agreement on a four-year, $68 million deal that makes him the highest-paid wide receiver in the NFL, sources told ESPN's Adam Schefter.

He is now tied to the Steelers through the 2021 season. He tweeted a picture of himself signing his new deal.

The Steelers had promised to rework Brown's contract this offseason. They restructured his contract last August, advancing $4 million of his 2017 salary into his base salary for 2016.

Brown, 28, is considered one of the best receivers in the league and has been a key piece of the Steelers' offense for the past several seasons. He had one year left on a five-year, $42 million contract he signed in 2012.

A 2010 sixth-round pick out of Central Michigan, Brown has been to five Pro Bowls and has earned three first-team All-Pro nods in his seven seasons. He led the league with 1,698 receiving yards in 2014.

He is the first player in Steelers history to finish with 1,000 receiving yards and 10 receiving touchdowns in three straight seasons.

Brown drew the ire of Steelers coach Mike Tomlin for posting a Facebook Live video from the locker room after a win against the Chiefs in the divisional round of the playoffs that caught Tomlin's postgame speech, but the incident appears to have been put to rest.