Galleries Videos CONTACT ADVERTISE
Girne 14°
scattered clouds
BUSINESS EDUCATION ENTERTAINMENT HEALTH POLITICS SCIENCE SPORTS TECHNOLOGY
08:11 Stick it to “The Man” at the Zero Trust Security Summit
04:37 What to Consider When Starting Your Own Business
10:17 Clover POS System for Dental Offices
06:14 How Mobile Technology is Revolutionizing the World of Poker
20:31 The Importance of Banks in Our Lives
05:46 Things to Consider When Hiring a Criminal Defense Lawyer
09:15 Couple T-shirts are ideal for spicing up relationships
09:01 Laser Tattoo Removal and Its Amazing Benefits
07:58 Consolidate your medical bills with a debt consolidation
19:48 Is your mind a certain people? Elina Tanskanen gives a task, which you...
BIST
122540
GOLD
298.453
USD
5.9321
GPB
7.7905
EUR
6.5570
Breaking News
Why Go for Physical Therapy and How to Find the Best Therapist
Close

LAKELAND — Lakewood coach Necole Tunsil was realistic about her team's chances in Saturday afternoon's Class 6A state championship game against Jacksonville Ribault. Her team needed to play its best game of the season, and she even mentioned a little... 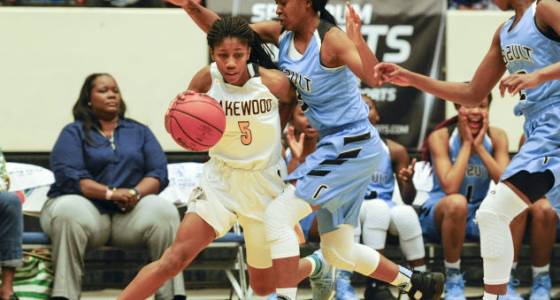 LAKELAND — Lakewood coach Necole Tunsil was realistic about her team's chances in Saturday afternoon's Class 6A state championship game against Jacksonville Ribault. Her team needed to play its best game of the season, and she even mentioned a little divine intervention wouldn't hurt either.

Just a few minutes into the game, however, it became clear that even Lakewood on its best day couldn't match up with the Trojans. By the end of the first quarter, the Spartans trailed by 22 points. They eventually lost 72-31 at the Lakeland Center.

"They were bigger, they were stronger," Tunsil said. "I don't think they wanted it anymore than we did. There have been games in the past where I thought the other team wanted it more than we did, but we wanted it just as much as them. Sometimes you just have to yield to the fact that they are bigger and stronger."

Midway through the first quarter, Ribault jumped to an 8-1 lead that included three straight baskets by Banks. The lead grew to 19-2 when Davis heated up with a 3-point shot and a layup.

It wasn't until 1:38 left in the first that the Spartans (23-5) scored their first field goal on a Toi Smith layup. By the end of the first, Lakewood trailed 26-4. The Spartans made only one of seven shots in the quarter.

Lakewood continued to struggle with the height of Davis and Banks. By halftime, Davis had 19 points and Banks 15. The Trojans grabbed 13 offensive rebounds at the half and finished with 27.

"On the boards they manhandled us," Tunsil said. "That was the ball game. "(Davis) is the real deal. She's everything that we thought she would be. She's going to be an asset to Tennessee. She's the truth."

The deficit was too wide for the Spartans to make a dent in the second half. By 3:45 in the third quarter, Ribault had a 60-25 lead and the rest of the game was played with a running clock.

Smith was a bright spot for Lakewood. The junior scored 14 points, had eight rebounds and went to the free-throw line 11 times. But the Spartans shot just 33.3 percent for the game.

"I think we deserved to be here and we earned it," Smith said. "We were ready to play but we just went up against a really good team."