Starlin Castro convinced Yankees have enough to be playoff team

TAMPA -- Yankees second baseman Starlin Castro has been paying attention to what's going on around him during the early stages of spring training. He sees things that outsiders who think this will be a nothing year don't. Kaprielian fine with being... 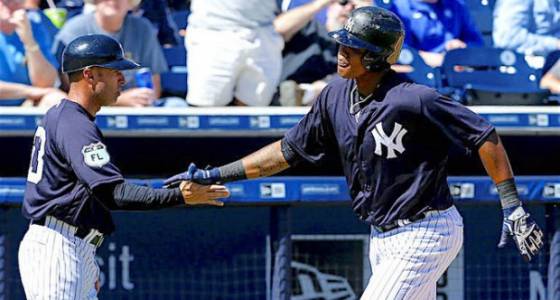 TAMPA -- Yankees second baseman Starlin Castro has been paying attention to what's going on around him during the early stages of spring training.

He sees things that outsiders who think this will be a nothing year don't.

Kaprielian fine with being babied

Too many young guys?

He saw how the Yankees came together with a lot of new (and younger) faces last August after management gave up on them and held a fire sale, and he really likes what he's seen so far this spring.

He likes the talent, everyone's work habits and their focus.

"I think we can surprise people," Castro said Sunday after hitting a three-run homer in a 7-2 Grapefruit League win over the Toronto Blue Jays. "I think if we keep together and we stay out of the injuries, I think we may surprise people ... like we did last year. We were sad after all the trades, but after that we played really good."

And he thinks the 2017 Yankees be better with Aroldis Chapman back closing, Matt Holliday DHing, Greg Bird and Chris Carter sharing first base, and all the youngins' - he and DP partner Didi Gregorius included - capable of doing more.

Can the Yankees be a playoff team?

The Red Sox, armed with three aces now that Chris Sale is with them, will be a big favorite to repeat as AL East champs.

"Yeah, but we compete," Castro said. "We go every day to compete. We don't take a day for granted."