LOS ANGELES -- Kawhi Leonard watched from the bench for nearly seven minutes Friday while teammates hammered away at his sliver of MVP candidacy during the San Antonio Spurs' 105-97 win over the Los Angeles Clippers.Leonard certainly didn’t mind.“No,... 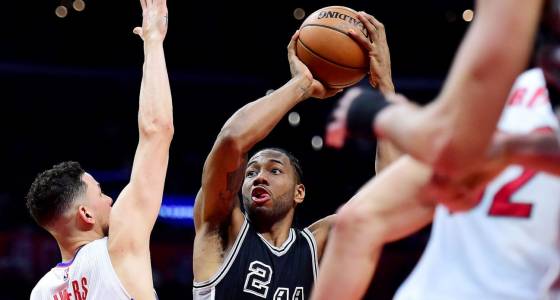 LOS ANGELES -- Kawhi Leonard watched from the bench for nearly seven minutes Friday while teammates hammered away at his sliver of MVP candidacy during the San Antonio Spurs' 105-97 win over the Los Angeles Clippers.

That’s because in finally downing the Clippers -- a team that had already beaten San Antonio twice this season -- the Spurs discovered they don’t always have to lean solely on Leonard to prosper in the most trying of situations.

“It was one game, and less than a half, not even one game,” veteran guard Manu Ginobili said. “So for that time, we did play well. But one game, two games, it can happen. But it’s great. Good team effort, good defense. First game after the [All-Star] break is usually hard for everybody. We reacted very well.”

The club also learned it will need to manage what Ginobili termed “a good problem,” with four bigs in Pau Gasol, LaMarcus Aldridge, Dewayne Dedmon and David Lee, who are sure to make life difficult for opponents down the stretch of the regular season and into the playoffs.

Leonard walked off the court holding up his hands in bewilderment at the 7:13 mark of the third quarter after receiving foul No. 5 trying to defend a driving Blake Griffin. Leonard, who hasn’t ever fouled out of a game in six seasons in the NBA, didn’t return to the action until there was 10:12 left to play.

Yet in Leonard’s absence, San Antonio suffered no drop-off in production on offense or defense.

“They did a great job [in Leonard’s absence]. The bench was really solid,” Spurs coach Gregg Popovich said. “I think we only turned it over four times in the second half. So we took care of the ball much better than we did in the first half. They just held together. It’s a 48-minute game. You just keep playing. You never know what’s going to happen.”

Prior to Leonard’s exit, the forward had dished six assists in the first half, the most in any half in his career.

Once Leonard committed his fifth foul, San Antonio quickly commenced outscoring the Clippers 24-16 to finish the third quarter, while limiting them to only one field goal over the final 4:42 of the frame.

“My team did a good job of keeping the lead to eight points,” Leonard said. “I was just waiting, trying to stay ready until my turn was called.”

As for San Antonio’s bigs, they combined for 39 rebounds, with Dedmon gobbling up a game-high 12, followed by Aldridge and Gasol with 11 apiece and Lee with five. San Antonio outrebounded the Clippers 51-36 and grabbed 15 offensive rebounds to the home team’s eight.

“It came down to a fight in the second half,” Griffin said. “I thought we had a stretch of five minutes or so that we didn’t execute the things we needed to execute offensively and defensively. When you play a team like them, it is death.”

Parker, Mills and Ginobili combined for 16 points during an 18-5 Spurs run in the third quarter.

Having watched from the sidelines for more than a month, recovering from a hand injury, Gasol arrived in Los Angeles a couple of days before the rest of the team to acclimate to life back on the court -- and that move paid dividends. Gasol hadn’t played in a game since Jan. 17.

“I felt pretty comfortable. I worked out. I came to L.A. early and got in two extra workouts before the team got here,” Gasol said. “I tested it. I feel more comfortable and more confident with my hand. I was able to play pretty normal. My timing is still not great. It’s not 100 percent, but I’ll get there.”

Aldridge certainly welcomed Gasol’s return, as he experienced an off night shooting (5-of-15).

“More scoring,” Aldridge said of Gasol’s return. “Tonight my shot wasn’t falling. He comes in, makes shots and makes things happen for us."

Does Aldridge envision Popovich having problems figuring out how to deploy San Antonio’s bigs moving forward?

“I don’t pay attention to it. That’s something that’s on [Popovich]," he said. "That’s a good problem to have, as Manu said. Guys are playing well right now.”

Rightfully, Ginobili still cautioned against putting too much stock in San Antonio’s performance as they prepare to complete the "rodeo road trip" on Sunday against the Los Angeles Lakers at the Staples Center.

“In general, we played very good defense, very solid. We made some mistakes here and there, of course. We got a little lucky, too, a couple of times when they could have made a run,” Ginobili said. "They made a couple of runs. But I think we played very solidly, and we’ve got to be proud of this one.”