CaptionCloseAfter playing brilliantly late in their previous game, UTSA coach Steve Henson expected his team to pick up where it finished Thursday night at Florida International.Instead, the Roadrunners sputtered with a sloppy start with nine turnovers in... 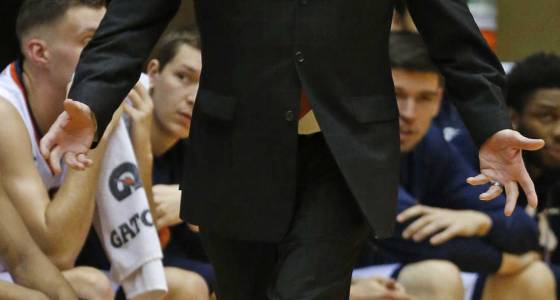 After playing brilliantly late in their previous game, UTSA coach Steve Henson expected his team to pick up where it finished Thursday night at Florida International.

Instead, the Roadrunners sputtered with a sloppy start with nine turnovers in the first 12 minutes and cold shooting throughout in a disappointing 73-66 loss Saturday night at Florida Atlantic.

“Thursday night was one of our best halves of the season offensively in terms of taking care of the basketball, running sets and getting results,” Henson told the school’s radio network after the game. “We were just the opposite in the first half tonight.”

The Roadrunners were held without a field goal for nearly six minutes late in the first half as FAU took control for its second home conference victory of the season.

“We couldn’t call a play and run it and get the results we wanted,” Henson said. “We were aggressive and we were driving it strong, but we just turned the ball over too much.”

The Roadrunners looked discombulated against the taller Owls throughout the game.

We’ve got to move it, but it can’t be frantic or at the expense of turning the ball over for sure,” Henson said. “We just got out of synch. We were fortunate to be in the ballgame at halftime as poorly as we played at times. We hung in there, but in the second half, it got away from us as well.”

But Adonis Filer, who scored a game-high 20 points, put the game away with a 3-pointer and a three-point play to effectively seal the victory.

The Roadrunners made the final margin a little more cosmetic with a late 7-3 run as FAU was limited to two baskets over the final four minutes. UTSA hit four of its final five shots from the field to finish at 38.2 percent from the field after shooting 50 percent in its victory Thursday night.

“I’m not surprised that our guys kept fighting and did some good things down the stretch,” Henson said. “That’s the nature of this group. They tend to handle things very, very well, stay together and they stay composed.

“That speaks a lot to their demeanor, their togetherness and their chemistry. This is a game where we easily could have let it get to 20 (points) on us, but we hung in there.”

FAU outrebounded UTSA, 36-35, and dominated inside with a 36-26 edge in paint points. The Owls also took advantage of their reserves with a 41-14 edge in bench points and a 10-4 edge in fast break points.

The loss finished off the Roadrunners’ road games for the season with a disappointing 2-15 road record.

They return home to the Convocation Center next week for games against Charlotte on Thursday and Old Dominion on Senior Day attempting to build momentum and improve their seed for the upcoming Conference USA tournament in Birmingham, Ala., the following week.

“We’re trying to finish this regular season out on a strong note,” Henson said. “We need a good week of practice and have people come see us Thursday in the Convo and come in and support our seniors. We need a big finish this week.”