JOHNSTOWN, Pa. -- The 40th anniversary of "Slap Shot" did not disappoint.Steve Carlson, Jeff Carlson and Dave Hanson, better known as the Hanson brothers, captured the spirit of the thing. Along with original cast members Yvon Barrette (Denis Lemieux),... 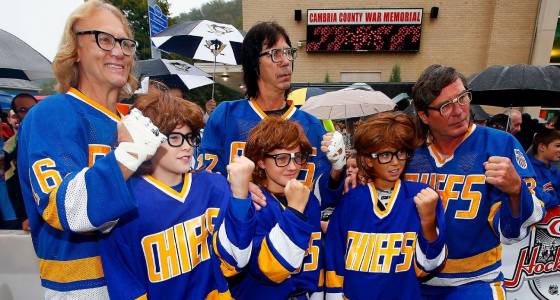 JOHNSTOWN, Pa. -- The 40th anniversary of "Slap Shot" did not disappoint.

The day started with breakfast at the hotel, but it turned into an autograph session with the hockey players and actors.

Barrette signs his autograph with one of his classic lines from the movie: "Trade me right f------ now."

Afterward, three white buses waited outside -- suspiciously all with drivers named Walt -- for a tour around Johnstown.

"This is my first time back here in 40 years," Houser said. "That is such a bizarre concept. I've told stories about this movie and for 40 years. I've talked about this film and doing it and what it was like and what the town was like, so to be back here is absolutely amazing."

"When you were on the 'Brady Bunch' did you talk about 'Slap Shot'?" Houser laughed.

Houser recounted that he learned about the team-first mentality during filming. He was 24 at the time and walked into a local Johnstown establishment by himself during a break in filming. Because his character "Killer" was a tough guy, a local started giving him some grief. Houser was trying to defuse the situation but when the Hansons walked in, he was able to step it up, knowing his teammates had his back.

"I finally knew what it was like to be on a hockey team," Houser said.

The anniversary entourage arrived at the War Memorial and watched the Johnstown Tomahawks, a junior team in the North American Hockey League, play a noon game. Movie fans who paid to participate in the anniversary game went into the locker room to get dressed more than hour before puck drop in order to sit and listen to more stories from the actors. Of course, one story was about Paul Newman's bedroom scene with Hanrahan's wife -- that it was filmed in Los Angeles, so no one in the cast actually saw it shot.

Before hitting the ice, the Hansons gave a pregame speech that featured their first locker room scene in the movie.

"And those punks in the white called us names!" Hanson yelled.

"Called us names!" Carlson responded. "Bleed all over 'em, let 'em know you're there!"

As the game was about to begin, actual blood was on the ice -- perhaps left over from the Tomahawks game -- which was fitting.

"Get the Hazmat crew," said one of the players.

The game consisted of two 20-minute, running-time periods. Barrette and Tenesi served as opposing coaches and both were barking line changes and yelling at the officials from the bench.

"This is fantastic," Barrette said. "It's good to be back here, man. This is so funny."

The Hansons immediately went into their skit. They "beat up" the ref, who was actually Carlson's son, Chris. The Hansons took out one of the goalies and gang-checked a defenseman. Carlson and Dave Hanson skated over to the opposing bench and challenged everyone. Eventually, they were "ejected" from the game with only a few minutes remaining.

In the iconic hockey movie, Johnstown played Charlestown, a steel town struggling with a slow demise. In real life, truth turned out to be more depressing than fiction, as Joe McDonald found out.

"Slap Shot" is celebrating the 40th anniversary of its release with a big weekend in Johnstown, Pennsylvania. As a tribute, our writers picked their favorite moments from the classic hockey film.

To mark the 40th anniversary of "Slap Shot," the Hanson brothers are holding a reunion game in the same arena that the iconic movie was shot. Steve Carlson, aka Steve Hanson, gives us the scoop.

Even though character Ned Braden, who was played by Michael Ontkean, was not in attendance, Houser mocked the striptease scene at the end of the movie as he skated off the ice.

After the game, everyone involved boarded the buses for dinner at the Aces. During the meal, cast members stood for over an hour and took pictures with the fans.

"It's a once-in-a-lifetime thing," said goalie Kenneth Scott Wertz, the only player from Johnstown. "A lot of people in the area, they grew up with 'Slap Shot.' When the Chiefs came into town, Steve was the head coach and it almost looked like you were watching the movie when you went to a game. That inspired high school players and inspired players that wanted to play. You had that 'Slap Shot' mentality to a point where you would drop the gloves and not be afraid to go at it. The way hockey progressed and the level progressed, you had the Chiefs and now we have the Tomahawks in the area, it's a great atmosphere for hockey again. This was a blast."

After he was done shaking hands and telling stories, Carlson took a sip of wine and said with a smile: "I don't wanna wear this jersey again. Well, until next weekend."