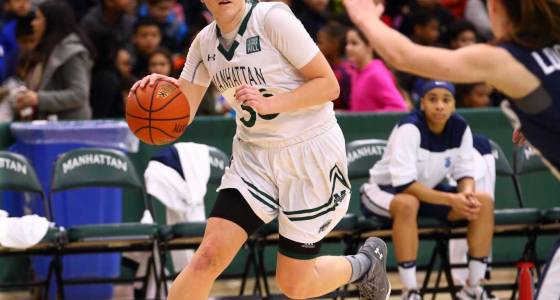 • Why they'll win: If Canisius can keep turnovers under control — the Golden Griffins are giving up two more a game than they force — than this decent shooting team has a shot.

• Why they won't: No team goes one-and-done on possessions worse than the Griffs, who average a MAAC-worst 7.9 offensive rebounds. This team shoots 40 percent from the field (third best), but Canisius needs more extra chances to play spoiler.

• Did you know: Canisius could have some local fans at Times Union Center, as senior Emily Weber is a former Shenendehowa star and Times Union Player of the Year. She's seen action in 10 games this season.

• Why they'll win: The Stags had a nice five-game winning streak late in league play. When Fairfield focuses on defense — it's third-best in the MAAC, allowing 58.2 points per game — it's a "tough out."

• Why they won't: Fairfield is a dreadful shooting team from the foul line —2nd-worst in the league at 68 percent.

• Did you know: Seniors Casey Smith and Kelsey Carey each surpassed the 1,000-point benchmark this season, even doing it in the same game.

• Why they'll win: A strong defensive team, with the best rebounding margin in the MAAC, and a balanced offensive attack.

• Why they won't: Iona isn't a particularly good passing team, which means the chance for a lot of standing around and watching.

• Did you know: Lizarazu was the MAAC Preseason Player of the Year, but 5-10 sophomore teammate Alexis Lewis is top five in the league in scoring, rebounding, 3-point percentage and offensive rebounds per game.

• Why they'll win: Maybe the Jaspers can latch onto the same magic the Manhattan men used in 2015 to win the MAAC title at Times Union Center.

• Why they won't: Manhattan's the second-worst MAAC scoring team (55.2 points per game) and doesn't have the firepower to keep up.

• Did you know: Vulin helped turn around a mediocre Virginia Tech program. As the Hokies' recruiting coordinator last year, he helped them post seven more wins than in 2014-15 and went to the postseason (National Invitation Tournament) for the first time in nine years.

• Why they'll win: A middle-of-the-pack statistical team still has the most successful MAAC coach on the bench, as Giorgis has won 10 MAAC Tournament titles, the latest of which came in 2014.

• Why they won't: Hand is going to be a star. But she's still learning. She has a team high in assists, but has two more turnovers than assists this season.

• Did you know: Marist will be the team most used to playing in front of crowds — the Red Foxes average a league-best 1,436 fans at home.

• Why they'll win: Shaw's outside shooting makes anything a possibility this time of year. The Hawks shoot a MAAC-best 33.5 percent from behind the arc.

• Did you know: No MAAC team will look newer in Albany this year. Monmouth has eight new players, and senior guard Helena Kurt is back after missing all of last year with a knee injury.

• Why they'll win: The Purple Eagles force a lot of foul shots, and they're making 74 percent from the line.

• Why they won't: Niagara is the second-worst MAAC team at securing defensive rebounds, which means it goes long stretches without the ball.

• Did you know: Niagara went 8-23 last season, so this appears to be modest improvement.

• Why they'll win: Quinnipiac has crazy-good offensive balance — the MAAC's best-scoring offense, even though Fay, the leading scorer, averages just 10.2 points per game.

• Why they won't: It might not be quite of UConn proportions, but it would be an upset if the Bobcats don't win the MAAC. The league's best offense and defense, plus a MAAC-best winning margin (12.1 points a game), point toward at worst a fifth consecutive appearance in the title game.

• Did you know: Quinnipiac has won more than 80 percent of its league games since joining the MAAC in 2013-14.

• Why they won't: Expectations are a new thing for this group.

• Did you know: This is already a history-making season for the Broncs, regardless of what happens in Albany. It's the most victories by the Broncs under Milligan and the most for the program since winning 26 games during the 1981-82 season. The 22 wins against Division I opponents are the most in a season in program history.

• Why they'll win: This would be one of the largest upsets in league tournament history, to put it mildly.

• Why they won't: Let's face it — the Peacocks are unlikely to win four MAAC Tournament games after getting only two league wins all season.

• Why they'll win: Home court hasn't been a huge advantage (8-6), and the Saints don't play most of their games at Times Union Center. Still, maybe some games in front of a partial crowd get a confident team over hump.

• Why they won't: Jaques says being in Albany isn't an advantage. Her players are in their usual routine — as in, school — while every other team can focus on hoops.

• Did you know: Siena has scored 80 or more points in three games this season.