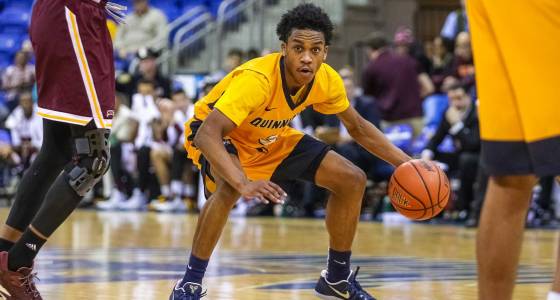 • Why they'll win: Canisius plays a five-out offense that is difficult to defend, because the Griffs shoot the 3-pointer well. Crumpton and junior guard Kassius Robertson, who averages a team-high 16.5 ppg, are better than 40 percent from behind the arc and senior guard Kiefer Douse isn't far behind at 39 percent.

• Why they won't: Canisius doesn't defend or rebound very well, which doesn't bode well for tournament success. The Golden Griffins are last in the MAAC in field-goal percentage defense at .485 and are second-to-last in rebounding margin at minus-2.7. They've lost three straight entering the tournament.

• Did you know: Witherspoon, who's done an impressive job in his first season at Canisius, is trying to win his first conference title as a Division I head coach. He spent 14 seasons at Buffalo (1999-2013) and lost in the Mid-American Conference championship game twice.

• Why they'll win: The Stags have an elite scorer they can rely on in junior guard Tyler Nelson, who ranks second in the MAAC in points per game. He doesn't have to do it by himself. Sophomore guards Curtis Cobb (12.7) and Jerry Johnson Jr. (11.5) also average in double figures. Fairfield also has inside power with Amadou Sibibe (9.4 rpg), a 6-8 graduate forward who missed last season due to injury.

• Why they won't: Fairfield was handled easily by regular-season champion Monmouth and by Saint Peter's late in the season, which indicates the Stags might not have what it takes for a tournament run. They did sweep the western New York trip last weekend. Next year might be the time for a team that graduates only one regular.

• Did you know: The Stags are seeking their first MAAC title since 1997. They've lost three times in the final since, including an overtime loss to Siena in 2010 that completed the Saints' third straight league championship.

• Why they'll win: The defending champion Gaels are always a threat to take home the trophy under Cluess, who's guided them to the championship game in five of his six season in New Rochelle, including the past four in a row. They have no shortage of talent with Washington and graduate transfer guards Jon Severe and Sam Cassell Jr., both of whom are trying to win a title in their only season with the Gaels.

• Why they won't: The Gaels' inconsistent play down the stretch should be of some concern to their fans. Washington can be brilliant, but he gets in foul trouble and averages only 21 minutes per game. Iona also doesn't have 2016 MAAC Tournament MVP A.J. English, who graduated, to rely on for clutch baskets.

• Did you know: Iona has won nine MAAC titles, the most in league history, with Siena and Manhattan tied for second with five. The Gaels' 15 final appearances are also the most in MAAC history.

• Why they'll win: The Jaspers offer a nice outside-inside combination with Turner, the quick Ball State transfer, and 6-9 junior forward Zane Waterman, who averages 14.5 points and 7.1 rebounds. Their trapping defense can frustrate opponents into mistakes, and Masiello is as good a coach as the MAAC has to offer, with two conference titles.

• Why they won't: Manhattan simply doesn't have enough scoring without all-MAAC guard Rich Williams, who's missed the entire season with a knee injury. Also, the Jaspers commit a staggering amount of mistakes. Their 16.8 turnovers per game rank 348th out of 351 Division I programs.

• Did you know: The unique nickname "Jaspers" comes from Brother Jasper of Mary, who served as Manhattan's athletic director in the late 19th century.

• Why they'll win: Perhaps the Red Foxes can look to their 2014-15 team for some inspiration. That edition also had a high-scoring senior (Chavaughn Lewis) and made some noise with a first-round upset of Quinnipiac. Hart has a pretty good sidekick in sophomore guard Brian Parker (12.6 ppg), who sat the final two games for a violation of team rules.

• Why they won't: It's been a tough road for Marist this season. Maker became emotional after the loss to Siena in Poughkeepsie on Feb. 11 while talking about how badly he felt for his players. The Red Foxes may be worn down by losing and by their lack of inside production. They're outrebounded by an average of 7.5 per game.

• Did you know: Marist never has reached the MAAC championship game since joining the league in 1997-98. Don't count on this being the first time.

• Why they'll win: The player wearing No. 12 is a pretty good place to start. The reigning conference Player of the Year has turned Times Union Center into his personal playground, averaging 38 points the past two times he faced Siena here. He has an excellent supporting cast that includes guards Je'lon Hornbeak, Micah Seaborn, Austin Tilghman and Collin Stewart of Glenville, so you can't beat the Hawks just by stopping Robinson.

• Why they won't: Anything can happen in the tournament. The Hawks were the top seed last year, too, but fell to Iona in the championship game. They're not unbeatable. Just ask Rider and Saint Peter's, each of whom beat Monmouth once and nearly won the second meeting.

• Did you know: Rice was a McDonald's All-American point guard at Binghamton High School in 1987. He played for Dean Smith at North Carolina and helped the Tar Heels reach the 1991 Final Four.

• Why they'll win: The Purple Eagles have shown they can win away from their home court. Niagara has road victories over Iona, Saint Peter's and Canisius this season. The Purple Eagles also played Siena competitively in a loss at Times Union Center. The backcourt of Scott and USC transfer Kahlil Dukes makes them dangerous.

• Why they won't: Let's not get carried away. Niagara has lost 20 games for the fourth season in a row. The Purple Eagles still are trying to get some stability and cohesiveness after having 20 players leave the program early over a three-year period.

• Did you know: Niagara forward Dominic Robb, a 6-foot-8 sophomore, leads the MAAC with 2.3 blocked shots per game.

• Why they'll win: The Bobcats can hope their promising young talent comes of age in the tournament. The Bobcats have two very impressive freshmen in Dixon and 6-5 guard Peter Kiss (13.3 ppg), each of whom has won MAAC Rookie of the Week four times. Also, 6-9 junior forward Chaise Daniels (13.1 ppg) gives Quinnipiac a viable inside threat.

• Why they won't: The Bobcats don't defend well enough to make a deep tournament run. They're allowing a MAAC-worst 83.2 ppg, including a whopping 112 in a Feb. 11 loss to Rider. They also don't rebound as ferociously as in the past. Siena was plus-36 on the boards in its two wins over Quinnipiac.

• Did you know: Quinnipiac is looking for its first league title since jumping to Division I in 1998. The Bobcats lost twice in the Northeast Conference final before moving to the MAAC in 2013.

• Why they'll win: The Broncs have to be taken seriously, because they've gotten wins over several of the MAAC's top teams: Monmouth, Iona, Siena and Canisius. Led by Thomas, who averages 8.9 rebounds, they're a team that loves to attack the glass, especially at the offensive end. Senior guard Jimmie Taylor (15.7 ppg) is having a nice senior year, including 37 against Quinnipiac on Feb. 11.

• Why they won't: The Broncs always seem to have talented teams that never quite put it together come postseason time. They haven't gotten past the MAAC quarterfinals since 2011.

• Did you know: Rider's most recent appearance in the championship game came in 2008, when NBA lottery pick Jason Thompson and company lost by 21 to Siena in the final.

• Why they'll win: The Peacocks manage to grind out victories with a slow, defensive style that's antithetical to the rest of the league. They're on a six-game winning streak. You easily could argue the Peacocks' record should be even better, but they lost at Monmouth and Iona in overtime and dropped three other league games by a combined six points. Led by Welton, this is a team no one should enjoy the idea of facing this weekend.

• Why they won't: All those close defeats could make one wonder if Saint Peter's has that go-to player late in games. It could be hard on the Peacocks if they fall behind early. They trailed Fairfield by 16 before a rally fell short in last year's quarterfinals.

• Did you know: Saint Peter's is the last current MAAC team other than Iona or Manhattan to win the title. The Peacocks defeated Iona in the 2011 championship game.

• Why they'll win: If not now, when? It's well-documented the Saints have four senior starters who are 1,000-point scorers. They have the tournament on their home court for the third straight year. They've gotten back prodigal sixth man Nico Clareth, who's the streakiest of shooters but gives them a necessary perimeter scoring threat. They've overcome a terrible start (4-11).

• Why they won't: The Saints hardly have been unbeatable at Times Union Center this season. They've lost at home to Monmouth, Iona and Canisius. Relying basically on six players, do the Saints have enough depth to win three games in three days? If Siena beats Fairfield late Saturday night, No. 1 seed Monmouth awaits.

• Did you know: Siena has won only one of the 12 MAAC Tournaments held at Times Union Center when the Saints weren't the No. 1 seed. The Saints were seeded seventh when they captured the title in 2002.