Just days after receiving the devastating news that he would not be able to play this season, Ben Simmons' 76ers teammates have praised the Australian's positive demeanour and work ethic as he sets his sights on an NBA debut next season."When I was around... 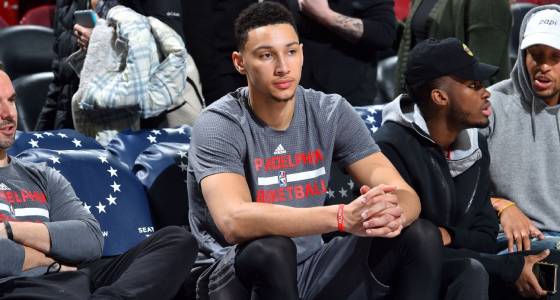 Just days after receiving the devastating news that he would not be able to play this season, Ben Simmons' 76ers teammates have praised the Australian's positive demeanour and work ethic as he sets his sights on an NBA debut next season.

"When I was around him you couldn't even tell he was upset that he wasn't going to play," guard Nic Stauskas told ESPN. "He was a true professional. He hasn't been moping or whining and complaining. He just shows up and works every day.

"I was just looking at Instagram and he was posting he was on the versaclimber -he did a 30-minute workout on that. It just shows you that he's hungrier than ever, and he's not gonna let a setback pull him down. He's gonna come back even stronger."

Is Ben Simmons now the NBA's top rookie for next season? Chad Ford and Kevin Pelton debate the top draft prospects and the next rookie class.

Simmons, the first overall pick in last June's NBA draft, had a scan on his broken right foot in New York on Thursday. The scan revealed that the foot was not fully healed. Given that the 76ers have only 24 games remaining, the franchise decided it was best for Simmons to keep him sidelined this season, with an eye toward bringing him back 100 percent healthy in 2017-18.

"We want to make sure Ben Simmons only takes the court when he's fully healed," he told reporters in Philadelphia. "We're not going to put him in a position to risk a re-fracture."

On Jan. 19, ESPN's Chris Haynes had reported that Simmons' foot had "completely healed," but even so, there was a "possibility that Simmons sits the entire season."

Even up until last Wednesday, 76ers' management, including head coach Brett Brown, still held out hope that Simmons would take the floor this season. Brown said his stress levels spiked while awaiting the results of the scan.

"The anxiety where you know the scan's going on at 2 [o'clock] so you sit there staring at your phone waiting for the news," said Brown pregame in New York on Saturday.

"My initial reaction went to him, and understanding that he's put in the work. Okay, now it's not gonna happen, so you have to recalibrate, and make sure he's not bored, and keep his mind focused and continue to improve him."

Although he hadn't yet been cleared for contact drills, the 6'10 Simmons had been able to participate in 5-0 practices with the team since mid-January.

"He was always practicing with us for half a practice, then he was working individually on the side," rookie Dario Saric told ESPN. "I can say that maybe we expected something like that [the news Simmons would miss the season]; that he might not be ready for this season because that kind of injury is a freaky injury. Something worse could happen after."

The players understood there was a chance Simmons might not be able to return this season, but were still very disappointed for him when it was made official. Stauskas believes the example set by other top picks who have had delayed rookie seasons due to injury will only hold Simmons in good stead to come back stronger in the future.

"You see guys like Blake Griffin or Joel Embiid who missed their first one or two years and they start playing and they're unbelievable, so I'm hoping the same thing comes true for Ben," Stauskas told ESPN.

"I know how hard he's been working with the rehab, and I know how anxious he is to get on the floor. He's the number one pick and he's a special talent [with] so much expectations. It just sucks to see a whole year slip through his fingers and not be able to perform or show the world why he was the number one pick."

There had been conjecture that the No. 1 pick was content to sit out the entire season, potentially maximising his earnings next season through his Nike endorsement deal, which includes bonuses for reaching incentives such as Rookie of the Year and the All-Rookie team.

His teammates say Simmons had every intention of debuting this season.

"He's worked really hard to get back," Gerald Henderson told ESPN. "I know he was planning on playing. It's disappointing. I know we would have loved to have him out on the court."