CaptionCloseLoudonvilleBack in the spring, when she was beyond frustrated with her team's shoddy offense at the end of last season, Siena women's basketball coach Ali Jaques took her players back to youth-league days.Her assistant coaches spared no details... 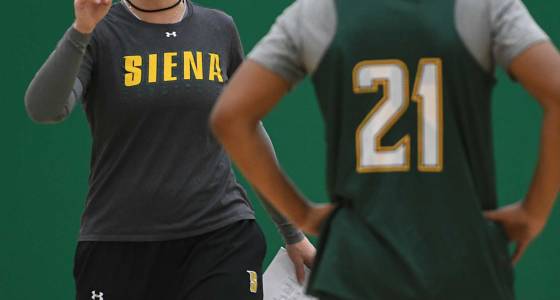 Back in the spring, when she was beyond frustrated with her team's shoddy offense at the end of last season, Siena women's basketball coach Ali Jaques took her players back to youth-league days.

Her assistant coaches spared no details in teaching players where to put their hands on the ball before passing it. Jaques demanded pinpoint accuracy to various spots on a wall.

Proficient passing has led to a lot more shooting accuracy and some history, too.

The Saints are averaging their most points per game (66.5) since the 2002-03 season. It's an improvement of nearly 10 per game from last season.

"How in the heck do you expect to win?" was Jaques' challenge to her team as her fourth year concluded with a 14-18 overall record.

"I had a 'come to Jesus' meeting with the team," she said. "We were last in basically every offensive category, it seemed like. We needed to learn to take care of the ball."

The Saints' defensive numbers are generally down compared to last season. But Jaques points out this group is playing more up-tempo offense, which leads to more possessions for the opponent to score.

Road to the MAAC Tournament

And this group's return to "blizzard" pressing is sometimes an all-or-nothing output that can give up layups or open perimeter shots if steals aren't coming.

Beyond the numbers, Jaques said she likes the way this group has grown up and expanded its team-wide versatility.

"We can play fast; we can slow it down," she said. "Our overall leadership has grown, and people understand their roles. We were pretty low there for awhile, but it didn't ruin us."

The Saints started just 3-12 overall and 2-4 in league games. But Siena won Jan. 20 at Marist for the first time since 2004. If that wasn't a season-changing win, it at least was a solid push in the right direction in the middle of a six-game winning streak.

During that game, Siena was up 14 at one point, eventually trailed and won on a Jackie Benitez layup with 20 seconds left.

Benitez's development at both ends of the floor has been a key factor. The 5-foot-10 sophomore moved to an off-guard position, which defensively allows her more chances to create chaos on the wings. Offensively, she's become a better passer to post players, Jaques said. This year she has 42 assists, compared to 14 a year ago. Her turnover pace is down slightly, too.

Those good things have left Jaques to go back to focusing on her specialty — defense.

"Some bad habits have crept in a little bit," she said in the lead-up to the MAAC Tournament.

Jaques points to a Jan. 26 home win against Canisius as a highlight so far — the Golden Griffs were harassed into 29 turnovers.

"We needed to improve our offense, no doubt," Jaques said. "But it also comes down to the tough teams win in March. Who's going to dig in and get a stop? There's a point in every game where you have to be tough or you're going to be out."