CaptionCloseNew YorkMets captain David Wright has returned from spring training to New York, been diagnosed with impingement in his right shoulder and was told not to throw for two weeks.The team said the third baseman was examined Tuesday at the Hospital... 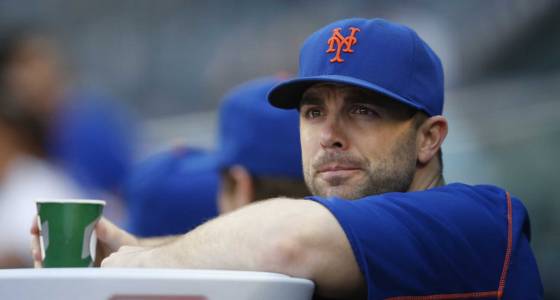 Mets captain David Wright has returned from spring training to New York, been diagnosed with impingement in his right shoulder and was told not to throw for two weeks.

The team said the third baseman was examined Tuesday at the Hospital for Special Surgery after feeling discomfort. He will be re-evaluated after the two weeks, and could be a designated hitter then.

The 34-year-old, a seven-time All-Star, has been limited to 75 regular-season games during the past two seasons. He was on the disabled list from April 15 to Aug. 24, 2015, when he strained his right hamstring and then developed spinal stenosis. He returned and helped the Mets win their first NL pennant since 2000. Last season, he was batting .226 with seven homers, 14 RBIs and 55 strikeouts in 137 at-bats through May 27 when he was sidelined by neck pain. He had season-ending surgery June 16 to repair a herniated disk.

Mets 3, Marlins 1: A couple of solo home runs from Travis d'Arnaud and T.J. Rivera held up, as right-hander Seth Lugo threw three scoreless innings and the Mets held off the Marlins at Roger Dean Stadium in Jupiter, Fla. Lugo, who will pitch for Puerto Rico in the World Baseball Classic, limited Miami to two hits and struck out two during his 37-pitch outing. All the offense the Mets needed came in the second inning as d'Arnaud and Rivera each connected off A.J. Ramos.

Yankees (ss) 9, Tigers 5: Gary Sanchez and Chris Carter hit their first homers of the year while projected Opening Day starter Masahiro Tanaka worked two scoreless innings in his spring debut, helping the Yankees beat the Tigers at George M. Steinbrenner Field in Tampa, Fla. Sanchez's homer was a two-run shot. Left-hander Daniel Norris started for Detroit and permitted a hit and a walk over 12/3 scoreless innings, striking out one. Dominic Ficociello hit a three-run homer in the seventh inning off the Yanks' Jonathan Holder. Ian Kinsler went 1-for-3.