Should Vikings wait on a Sam Bradford contract, or do one soon?

With one year left on Sam Bradford's contract, should the Minnesota Vikings feel a sense of urgency to address the quarterback's status, or should they make him prove he's worth a long-term deal? Our Twitter question of the week:#VikingsMail Is there really... 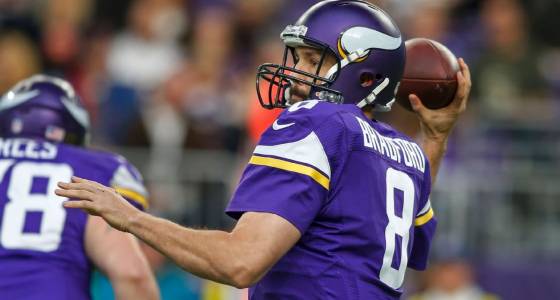 With one year left on Sam Bradford's contract, should the Minnesota Vikings feel a sense of urgency to address the quarterback's status, or should they make him prove he's worth a long-term deal? Our Twitter question of the week:

#VikingsMail Is there really a lot of steam around extending Bradford? If so, why? Why not make him prove it?

@GoesslingESPN: Good morning, everyone. We'll spend some time today discussing one of the big issues the Vikings are going to face this offseason: What to do about the future of Bradford, their 29-year-old quarterback who posted the best numbers of his career after arriving in a Sept. 3 trade.

Bradford is to make $18 million in 2017, after hitting a playing time-related $1 million escalator in his contract. He's due a $4 million roster bonus on the fifth day of the league year, but he obviously isn't going anywhere; the Vikings don't know what Teddy Bridgewater's future holds, and Mike Zimmer and Rick Spielman have talked about how remarkable it was for Bradford to put up the numbers he did, given how quickly he had to get acclimated to the Vikings' offense.

"I think he’s just right now in the prime of his career," Spielman said. "I can tell you that looking back on that trade with all the other options, that I would do that over in a mini-second to get a Sam Bradford on our football team with the circumstance that we were dealing with, because I think that he’s [got] a chance to be a pretty good player and quarterback in this league."

That sounds to me like a quarterback the Vikings plan to have around for the foreseeable future -- though it should be noted that when Spielman was asked about a long-term extension for Bradford on Thursday, he said, "Everything's in flux right now. I'll just leave it at that."

The Vikings certainly could wait until sometime during the season, or after the 2017 season, to get a deal done with Bradford. Part of the art of negotiations is, as it is in any business, managing relationships with clients (so to speak). If the Vikings wait to talk about an extension, they run the risk of irking Bradford and his agent, Tom Condon, who's no stranger to deals with big-time quarterbacks. They still don't know what the future holds for Bridgewater, as Spielman said on Thursday, and they already thought enough of Bradford -- not just in the short term, but in the long term -- to trade a first-round pick and a 2018 fourth-rounder for him in September. A trade like that already assigned a certain amount of value to Bradford; waiting to talk about a contract extension could then send mixed messages.

Let's say, for the sake of argument, that Bradford capitalizes on a full offseason to work with his receivers and takes a step forward in Pat Shurmur's offense. Say he goes out, surpasses 4,000 yards and throws 25 touchdown passes while keeping his turnovers low. Given the state of quarterback play in the NFL, a 30-year-old coming off that kind of year is going to have plenty of suitors in free agency, which would place a further premium on the Vikings' price to keep Bradford. In general, NFL teams do deals on the early side to create cost certainty in exchange for giving the player guaranteed money sooner; it's one of the reasons Spielman said Thursday that an extension for cornerback Xavier Rhodes figures to be coming in the near future. If the Vikings think Bradford is going to be their quarterback for the foreseeable future, they might decide it's worth being proactive with someone who's that important to their program.

It's certainly possible the Vikings could wait on a deal for Bradford; there are sensible arguments for gathering more evidence before making such a substantial commitment to a quarterback. If you're looking for the argument for doing a deal this offseason, cost certainty and a sturdy relationship with Bradford are two of the main points for said argument.