CaptionCloseTorontoMika Zibanejad scored the shootout winner and the New York Rangers continued a strong February with a 2-1 victory over the Toronto Maple Leafs on Thursday night.Henrik Lundqvist made 32 saves and J.T. Miller scored the game-tying goal in... 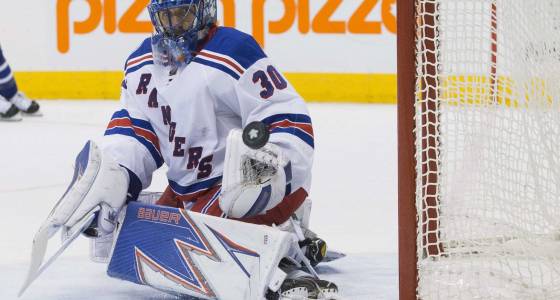 Mika Zibanejad scored the shootout winner and the New York Rangers continued a strong February with a 2-1 victory over the Toronto Maple Leafs on Thursday night.

Henrik Lundqvist made 32 saves and J.T. Miller scored the game-tying goal in the third period for the Rangers, who improved to 8-1-1 this month.

New York moved into third place in the Metropolitan Division with 80 points.

Connor Brown scored for Toronto, which fell to 1-7 in shootouts this season. Frederik Andersen had a stellar performance in defeat with 37 saves.

The Leafs hold the third playoff spot in the Atlantic Division (68 points), two points back of Ottawa (70) and four back of Montreal.

Islanders 3, Canadiens 0: Rookie Anthony Beauvillier scored in the first period, Thomas Greiss made 24 saves, and New York beat Montreal. Anders Lee scored in the second period and John Tavares added an empty-net goal in the final minute to seal the Islanders' third straight win. New York improved to 12-4-2 since interim coach Doug Weight replaced the fired Jack Capuano. Josh Bailey and Brock Nelson each had two assists, and Greiss got his third shutout of the season. Carey Price finished with 21 saves as the Canadiens lost coach Claude Julien's 1,000th NHL game. Montreal is 1-2-0 since Julien replaced Michel Therrien last week and has totaled only 14 goals while going 2-7-1 in the past 10 games, including four shutouts.

Flames 3, Lightning 2: Sean Monahan scored his 100th NHL goal, Brian Elliott made 23 saves, and Calgary beat Tampa Bay. Dougie Hamilton had a goal and two assists, and Mikael Backlund also scored to help the Flames improve to 7-2-1 over their past 10 games. Tampa Bay, which entered with a seven-game points streak (5-0-2), got goals from Vladislav Namestnikov and Nikita Kucherov. Andrei Vasilevskiy stopped 22 shots.

Predators 4, Avalanche 2: Filip Forsberg scored his second straight hat trick, and Nashville beat Colorado. Forsberg, who scored three times in the second period of Tuesday night's overtime loss to Calgary, got the hat trick with an empty-net goal with 36.5 seconds left. Viktor Arvidsson also scored a goal, and Roman Josi and Ryan Johansen each added two assists for Nashville. Goalie Pekka Rinne made 20 saves for the win after being pulled Tuesday night. Jarome Iginla had a goal and an assist for the Avalanche, who have lost three straight. Peter Wiercioch also had a goal.

Blackhawks 6, Coyotes 3: Patrick Kane scored three goals for his third career hat trick to lead Chicago past Arizona for its third straight win and eighth in nine games. Kane has 23 goals to lead Chicago, which closed within three points of first-place Minnesota in the Central Division and Western Conference. Rookies Nick Schmaltz and Ryan Hartman each had a goal and assist. Blackhawks defenseman Michal Rozsival scored his first goal of the season in his first game since Jan. 15. Chicago captain Jonathan Toews added two assists to extend his points scoring streak to five games and increase his output to 22 points in his past 13. Jakob Chychrun, Ryan White and Radim Vrbata scored for the Coyotes.