Pierre LeBrun: To me it's that the St. Louis Blues didn't get the bonanza I would have predicted for defenseman Kevin Shattenkirk. And while they did fine in their return from the Washington Capitals, it suggests the market didn't heat up for Shattenkirk... 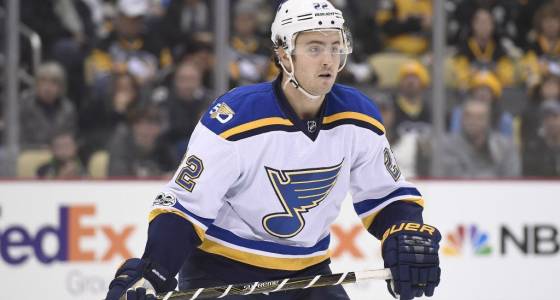 Pierre LeBrun: To me it's that the St. Louis Blues didn't get the bonanza I would have predicted for defenseman Kevin Shattenkirk. And while they did fine in their return from the Washington Capitals, it suggests the market didn't heat up for Shattenkirk like many of us figured it would, or perhaps even the Blues. I would say Blues GM Doug Armstrong fell victim to the fact some interested parties (guessing the likes of the New York Rangers and Boston Bruins) want to wait until July 1 to try to get Shattenkirk in free agency and thus not give up trade assets. Don't be surprised if the New Jersey Devils are also among the teams bidding this summer. You really can't blame Armstrong here, he did the best he could given that Shattenkirk wasn't interested in signing an extension, not with the Blues, nor with would-be bidders in a sign-and-trade. Whatever the case, a softer-than-expected market for Shattenkirk turned out to be a real bonus for the powerhouse Capitals, who just got even scarier, especially on the power play.

Scott Burnside: I did find it interesting that three Canadian teams in the Atlantic(Montreal, Ottawa and Toronto) made deals, but of course all of that was trumped by the Monday evening addition of Shattenkirk by the Capitals. In much the same way I viewed the addition of center Martin Hanzal as a declaration of all-in by the Minnesota Wild, the Shattenkirk trade has to be considered all-in times five for the Caps. Even if they had done nothing at the trade deadline, I'd still have considered them the No. 1 Stanley Cup contender (and not just because I picked them to win it all back in the fall). Now they've put another step or two between themselves and other contenders. The question now is whether this bold move forces teams the Pittsburgh Penguins, the New York Rangers and/or Columbus Blue Jackets to try to keep pace before Wednesday's trade deadline.

Rob Vollman: I was surprised by all the praise for Jon Dahlen, a prospect few pundits had mentioned previously. For example, he was not included in most expert predraft rankings, and the 2016-17 Hockey Forecaster had him ranked 15th in the Ottawa Senators' prospect pool. A few scouts have always been fans of his, but this near-consensus that Dahlen is a blue-chip prospect appears to have been created overnight. As for the other half of the deal, Alex Burrows is well past his prime, but he is also an upgrade over those who have been manning the wings of Ottawa's checking lines in recent years. It isn't unreasonable for the Vancouver Canucks to extract some small token in exchange for Burrows, but a blue-chip prospect is far too much -- assuming that's what Dahlen really is.

Sure, it's great that the Washington Capitals went out and got the biggest name on the trade block. But unless this group finally does something in the playoffs, bigger changes will be coming.

Corey Pronman: I was also surprised that both Ontario teams were buyers. I get that it's a weak Atlantic Division and both could make the playoffs and maybe have a puncher's chance to win a round or two, but it's hard for me to see the argument that giving up valuable futures (second-round pick for the Toronto Maple Leafs; and the Senators giving up Dahlen, who was a second-round pick last season and who I rated in the summer as Ottawa's No. 4 prospect) was worth it for a little extra kick. I see a little more of a rational argument from Toronto's end though, as they've been a top 10 team in score-adjusted Corsi. I don't see a very realistic path forward for either of them, though, to win a Stanley Cup this summer. Maybe their management would argue playoff experience for their roster, or ownership would argue playoff revenue, but in my view you only buy when you have a shot to win it all.

Joe McDonald:The fact that Shattenkirk landed in Washington makes the Capitals a major Cup contender this season. They were already a dangerous team but maybe his presence on the blue line and on the power play will give the Capitals the edge they have been missing in the postseason. Off the ice, his personality will fit perfectly in the locker room. I agree with Scotty that now teams like the Penguins and Rangers will be forced to react before the deadline.