Seniors lead Villanova to yet another milestone

VILLANOVA, Pa. -- The question went to Josh Hart and Kris Jenkins, a logical one on the occasion of the final home game of their Villanova careers.“How would you describe your time at Villanova?” the reporter asked.“Battles,” Hart... 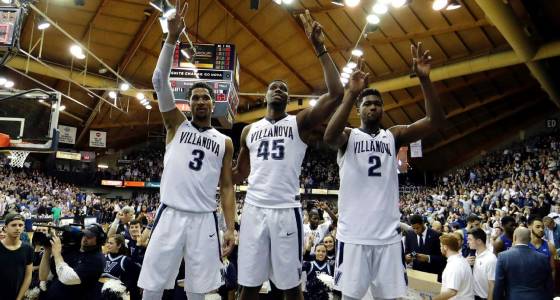 VILLANOVA, Pa. -- The question went to Josh Hart and Kris Jenkins, a logical one on the occasion of the final home game of their Villanova careers.

“How would you describe your time at Villanova?” the reporter asked.

And then Jenkins leaned in to the microphone on the table in front of him and interrupted.

And that right there is the essence of this Villanova basketball team.

The Wildcats do battle, which is why their season is far from over.

This team will never be sexy and the Wildcats will occasionally not even be pretty. But they will be scrappy.

Villanova will get results.

And usually the results will lead to trophies.

“It’s senior leadership, man, and the character of these guys,” coach Jay Wright said of his seniors.

With its 79-63 victory Saturday over Creighton, the senior class of Jenkins, Hart and Darryl Reynolds now owns a national title, four Big East regular-season crowns, a 127-13 overall record and a perfect 16-0 mark in the Big 5. In four years, Villanova has never lost back-to-back games.

It is a run of excellence more even than dominance. And as Jenkins pointed out, it's a run that is nowhere near over.

Because if you think the Wildcats can’t defend their national title, you simply haven’t been paying attention.

The game against the Bluejays was emblematic not just of who Villanova is, but why the Wildcats can win it all again.

They were short-handed -- Reynolds didn’t play for the fifth consecutive game because of a deep rib bruise -- but they’ve been short-handed all season. Phil Booth hasn’t played because of knee tendinitis and Omari Spellman was ruled out by the NCAA in the preseason.

The Wildcats couldn’t shoot well -- they were just 4-of-19 from behind the arc -- but they haven’t been consistently scintillating there all season. Villanova shoots 37 percent from 3-point range.

The Wildcats gave back all of a 10-point first-half lead to trail midway through the second. Easy Street has not exactly been their preferred route all season.

Villanova already has mastered that lesson.

“Are they tired? Yeah. Are they worn out? Yeah, but that doesn’t matter,” Wright said. “Those can’t be the reasons you lose. If you’re tired or not, you have to find a way to win and they did.”

If Villanova had a question at the start of this season it was how Jenkins and Hart would perform as leaders. For four years, the Wildcats were guided by the steady hands of Ryan Arcidiacono and Daniel Ochefu. Jenkins and Hart went along for the ride, two wildly talented players but guys Wright tabbed as "goofy."

A 27-3 record stands as evidence as to how the duo has responded. Jenkins and Hart have been leaders, yet also team players. Wright pointed out a recent game against Xavier. Without Reynolds and with Eric Paschall in foul trouble, the 6-foot-6 Hart was pressed to play center -- not exactly the natural position for the national player of the year candidate.

He did so without hesitation.

Jenkins, meantime, hasn’t had that the same reliable shooting stroke that earned him his "Big Smoove" moniker. He’s 8-of-23 from behind the arc in his past four games and was just 1-of-7 against Creighton. So instead he opted to post up or drive to the basket. The plays might have lacked the finesse and prettiness of his usual 3-point swishes, but they got the job done. Jenkins scored 15 points in the game. He also had four rebounds, four steals and three assists.

“It’s just about the next step on the journey,” Hart said.

The journey continues, but some things do end.

Along with closing out the home season, the Wildcats temporarily closed out the Pavilion, their on-campus arena. The building, accurately referred to as the Ski Lodge by longtime Philadelphia Daily News columnist Dick Jerardi, is being gutted and redone thanks to a $60 million donation. During renovations, the Wildcats likely will play most of their regular-season games at the downtown Wells Fargo Center, with maybe a few cameos elsewhere, such as at the Palestra.

Fittingly, Hart made the last bucket, a fallaway 3-pointer that left him on his backside.

As he spoke, Jenkins pointed a finger at the media. When asked about his national championship game-winning shot over and over, that has been Jenkins’ response -- I’ll worry about that when I’m old and gray.

Because right now, it doesn’t matter.

As the buzzer sounded, Hart, Jenkins and Reynolds hopped on top of a baseline table in front of the student section and hoisted the Big East trophy over their heads.

Two things Villanova happens to be very good at.