With the shocking news that Sebastian Vettel is set to leave Ferrari after six years at the end of this season and with no indication of where the German’s future lies. 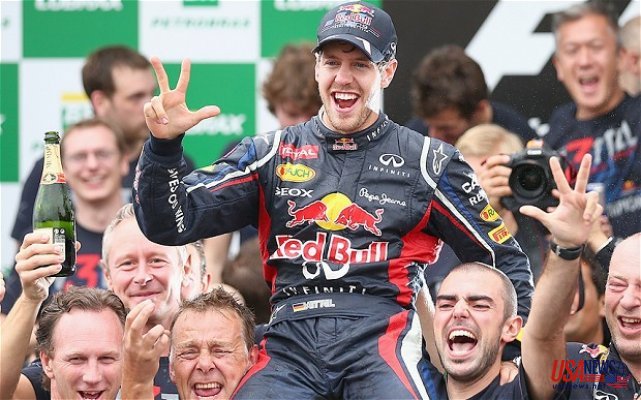 With the shocking news that Sebastian Vettel is set to leave Ferrari after six years at the end of this season and with no indication of where the German’s future lies. There is no better time to look back at some of Sebastian Vettel’s greatest races and see what Ferrari will be missing out on. Over 12 seasons, Vettel produced some blistering performances on the track. He picked up four World titles and 53 Grand Prix wins for his efforts. Let’s discover some of his finest moments.

Sebastian Vettel had not won a race for almost 18 months when he went into this Grand Prix. But it looks like Vettel had done his homework for this one and brought a sound game plan to this race. Despite qualifying second, he held his nerve as he tried to pass Lewis Hamilton early in the race. But as the race went on and Hamilton had to make a pit stop. Vettel was able to get in front and maintain his lead.  He won the race by up to 10 seconds.

At this stage of his career, everything that Vettel touched turned to gold. He had won this race in 2011 and 2012. Vettel started in pole and had dominated the weekend’s qualifiers. He ended up racing way from everyone and left the rest of the field for dead. Fernando Alonso kept pace but he was forced to pit, gifting Vettel a 30-second gap over him. This gives Vettel his ninth win in a row.

Starting second once more and against hot favourites Lewis Hamilton and his Mercedes team. Sebastian Vettel pulled off one of his most favorite victories on the Sepang circuit. He stuck close to Hamilton at the start of the race, but because of the heat, the tyres on the Mercedes struggled and had to be changed. Vettel kept going and made only two stops against Mercedes’s three stops. This strategy won the day for Vettel and Ferrari.

It was winner takes all in Monza. In this last race of the season, four drivers could walk away with the world title. After a serious crash between Michael Schumacher and Vitantonio Liuzzi on the first lap, everything changed. Vettel spent most of the race fighting off McLaren. But he remained calm and dominated the race to win. Sebastian Vettel became the youngest winner of the Formula One Championship with four points to spare.

There are no doubting Sebastian Vettel’s talent and determination. He has provided racing fans with some of the most hair-raising moments.  No matter where he decides to go next, he is sure to go down as one of Formula One’s best and most exciting drivers. If you are looking for some racing action away from the circuit, why not take Speed Cash Slot at Lucky Pants Bingo for a lap and enjoy this racing themed game.