Scott Darling comes up big in a pinch for Blackhawks

Usually, Blackhawks backup goaltender Scott Darling has plenty of time to prepare for his starts. He usually knows days in advance that he will be taking the net.That wasn’t the case Sunday, when starter Corey Crawford came down with an illness that caused... 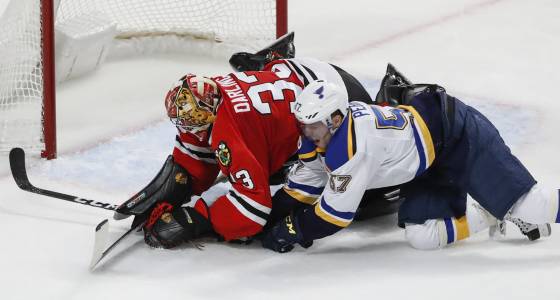 Usually, Blackhawks backup goaltender Scott Darling has plenty of time to prepare for his starts. He usually knows days in advance that he will be taking the net.

That wasn’t the case Sunday, when starter Corey Crawford came down with an illness that caused him to miss Sunday’s game against the Blues.

It worked out fine in the end for the Hawks, who ended up with a 4-2 victory behind 30 saves from Darling.

"It’s kind of my job. It’s unfortunate," Darling said. "You don’t want your teammate sick, but I’m sure he’s going to be fine soon. For me, it’s just another great opportunity to get a game that I wasn’t expecting to play. So, I’m happy it went good (sic).”

The Blues kept Darling busy. There was a big save in the first, when Darling sprawled out just in time to get a blocker on a Paul Stastny shot.

Darling was prepared thanks to the scouting report before the game.

"I don’t remember what happened up at the blue line, but it came down and they kind of had a 2-on-0, and in the pre-scouts the coaches were very adamant that they love the open-side play," Darling said. "So right when I slid over to the first guy, the light bulb went off in my head that the coaches were telling us that all morning.

"But still, he got it across quick. I didn’t even have time to push. I just reached and tried to get an arm and leg over there. (I was) lucky enough to get my arm on it."

Darling also made a number of saves to help keep the game tied in the third period.

"He was kicking his long legs out tonight where a couple chances seemed like they were sure goals and he got a piece of them to keep them out," captain Jonathan Toews said. "We had a lot of great scoring chances and I think Scotty definitely kept us in that one and kept us ahead, so it’s amazing that he can just step in when we need him and just stay on top of his game."