Scorecard: Back from injuries, Wilder shows power in win 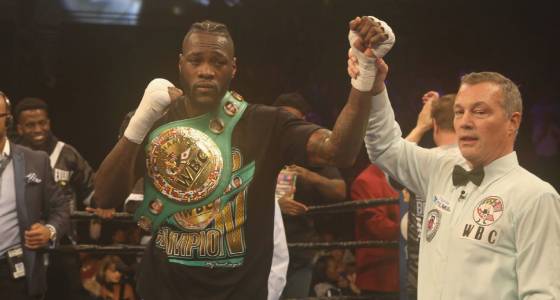 A roundup of the past week's notable boxing results from around the world:

Rafael's remarks: The 27-year-old Fukuhara, a southpaw and the Japanese national champion, claimed a split decision over Calleros, 27, of Mexico, in a hard-fought action battle. Fukuhara overcame being badly hurt and nearly getting knocked down in the second round of the fast-paced fight in which both guys took punishment. He rocked Calleros late in the 12th round. The interim belt was available because full titleholder Katsunari Takayama (31-8, 12 KOs), of Japan, is sidelined by injury. Upon his return Takayama must face Fukuhara. Calleros had his five-fight winning streak come to an end.

Rafael's remarks: Wilder has the great eraser: His powerful right hand, which can do away with any man at any time. That is what happened to Washington as Wilder, 31, of Tuscaloosa, Alabama, scored what was essentially a one-punch knockdown to retain his title for the fifth time. Wilder, returning from right hand and biceps surgery last summer, did not look sharp and had some trouble with Washington's jab and tenacity, but his right hand and arm held up. In the fifth round, Wilder landed a huge right hand, with a lesser impactful left behind it, and Washington went down. Washington was not all there when the fight continued and when Wilder battered him with a series of shots referee Mike Griffin intervened at 1 minute, 45 seconds, and not a moment to soon because Washington, 34, of Vallejo, California, only stayed on his feet by using the ropes to steady himself.

Jarrett Hurd knocks out Tony Harrison in the ninth round, his 14th career knockout, to pick up a vacant junior middleweight title. Watch

Rafael's remarks: When Jermall Charlo vacated his 154-pound world title two weeks ago, Hurd-Harrison, originally slated as the title eliminator to produce Charlo's mandatory challenger, was upgraded to being for the vacant belt. That gave even more incentive to Hurd, 26, of Accokeek, Maryland, and Harrison, 26, of Detroit, who produced a good fight. Both are good boxers but many believed going into the fight that Hurd's size and power would be the difference and it turned out to be just that.

Harrison boxed well early but Hurd slowly imposed himself on Harrison and broke him down. He had Harrison in big trouble in the seventh round, nearly stopped him in the eighth and continued to bang on him in the ninth, nailing him with a right hand that dropped him. Harrison got to his feet, but he spit out his mouthpiece in a sign of surrender and referee Jim Korb waved it off at 2 minutes, 24 seconds.

Dominic Breazeale knocks Izu Ugonoh through the ropes in the fifth round, ending their heavyweight matchup and improving Breazeale to 18-1. Watch

Rafael's remarks: Fight of the year alert! Breazeale, the former U.S. Olympian and world title challenger, and Poland's Ugonoh, who was making his American debut, put on a wild action fight filled with four knockdowns and drama. Both had huge moments but Breazeale, 31, of Los Angeles, showed enormous heart to rally for the knockout. Ugonoh was having a huge third round -- round of the year candidate! -- when Breazeale, got out of trouble with a counter right hand that dropped Ugonoh. In the fourth round, Ugonoh dropped a fading and busted up Breazeale only to have Breazeale rally to score two knockdowns in the fifth round, including the final one that knocked Ugonoh onto the ring apron as referee Jeff Dodson called off the fight at 50 seconds. This was about as exciting as it gets for heavyweight boxing.

Rafael's remarks: The 24-year-old Plant, a fine prospect from Ashland, Kentucky, put on a clinic in dismantling Awimbono, 36, a Ghana native fighting out of New York. Plant knocked Awimbono down with a left hook late in the first round and cruised to the shutout victory. Awimbono lost his third in a row.

Rafael's remarks: Nyambayar, 24, won an Olympic silver medal for Mongolia in 2012 and now is based in Carson, California, and training under Joe Goossen. The fight with Gemino, 24, of the Philippines, was a fierce one but Nyambayar maintained control all the way. Gemino showed huge heart to survive four knockdowns, in the third round, twice in the sixth and again in the 10th. After beating the count in the 10th round, Nyambayar continued to pound Gemino until referee Flynn Gerald stepped in at 1 minute, 5 seconds.

Rafael's remarks: Mexico's Vargas, 26, claimed the belt vacated by Japan's Hozumi Hasegawa upon his retirement in December and in doing so kept McDonnell, 30, of England, from joining twin brother and bantamweight titleholder Jamie McDonnell from becoming the first set of British twins to simultaneously hold world titles. Vargas used his height advantage to his benefit and was the sharper, better puncher throughout the fight, which he clearly won despite the draw scorecard from judge Ian John Lewis.

Rafael's remarks: Alvarez, 32, a 2008 Colombian Olympian now fighting out of Montreal, has been world champion (and Montreal rival) Adonis Stevenson's mandatory challenger since outpointing Isaac Chilemba in November 2015. The fight is way overdue but Alvarez elected to risk his status against Montreal's Bute, the faded former super middleweight titleholder and Canada's most popular fighter. Bute, a 36-year-old southpaw coming off a suspension for a failed drug test following an April draw with Badou Jack in a super middleweight title fight, has been on the backside of his career for the past few years. For Alvarez, the fight was a good gamble and he may have ended Bute's career. For four rounds it was fairly competitive until Alvarez unleashed two right hands that caught Bute clean and dropped him hard. He beat the count, but was in no shape to go on. Alvarez is on course to face Stevenson (28-1, 23 KOs) later this year as long as Stevenson wins an April 29 defense being planned. Bute, now 2-4-1 in his last seven bouts, is done as a top fighter.

Rafael's remarks: Vargas, 20, of Kissimmee, Florida, a 2016 U.S. Olympian, signed with Top Rank and made his pro debut against designated knockout victim De La Paz, 28, of Puerto Rico, who has been whacked in all four of his bouts. Vargas did exactly as expected, which was to blow through his opponent. Vargas was all over him from the opening bell before dropping him with a tremendous right hand to the chin. De La Paz was able to continue, but Vargas was bludgeoning him when De La Paz's corner threw in the towel at 1 minute, 48 seconds.

Rafael's remarks: Lopez, 19, of Davie, Florida, failed to make the 2016 U.S. Olympic team and instead competed in Rio de Janeiro as a member of the Honduras national team as that is where his parents are from. He is a really good looking prospect with superb hand speed, which was on display as he took apart Medel, 28, of Mexico, who lost his third fight in a row and for the eighth time in his last nine bouts. Lopez, who turned pro in November with a second-round knockout on the Manny Pacquiao-Jessie Vargas undercard, dominated Medel. When Lopez rocked Medel with a right hand in the fourth round, referee Massimo Montanini stopped the fight at 58 seconds and Lopez did an impressive back flip.

Rafael's remarks: DeLoach, 23, of Augusta, Georgia, and Pearson, a 26-year-old southpaw from Dayton, Ohio, were supposed to fight in September but Pearson withdrew because of an injury. It was rescheduled to headline Showtime's "ShoBox: The New Generation" on promoter Floyd Mayweather's 40th birthday card. DeLoach scored his biggest career victory and won his seventh fight in a row. DeLoach dropped Pearson with a left hook with a minute to go in the second round and stayed right on him when the fight resumed. He hurt Pearson with combinations (but particularly the right hand) to drop him to his knees. Pearson crawled around on his knees and grabbed the ring ropes but referee Jack Reiss counted him out at 2 minutes, 30 seconds.

Rafael's remarks: It may have been promoter Floyd Mayweather's birthday, but Rodriguez, his newly signed fighter, is the one who got the gift of a hometown split decision he most certainly did not deserve. Rodriguez, 23, of Riverside, California, went past eight rounds for the first time but also got dropped for the fist time in his career when Bravo, 29, of Chile, floored him with a right hand in the fifth round. Bravo also had a big sixth round and deserved the win.

Rafael's remarks: Tabiti, 27, of Chicago, showed far superior skills and power as he manhandled Graves, 34, of Beaumont, Texas, for his second win in a row over an unbeaten opponent. Tabiti nearly ended the fight late in the fourth round with a series of shots that had Graves on the ropes and in big trouble. In the sixth round, Tabiti dropped Graves, who was boxing for only the second time in 27 months, with a body shot. After the round, Graves' corner threw in the towel.