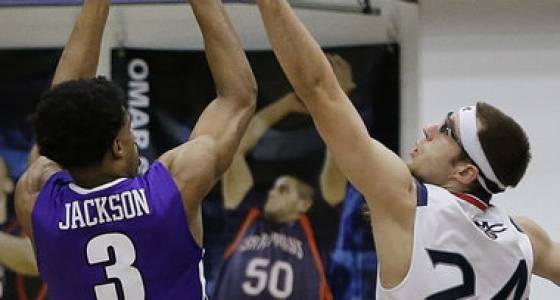 Portland was dealt another obstacle when sophomore point guard Xavier Hallinan came down with the flu and was unable to join the team at the game. Hallinan had started the previous four games and was coming off of a career-high 17 points against BYU on Thursday.

Tyson buried 7-of-9 three-pointers and finished 8-of-11 overall from the field. Gabe Taylor added 16 points and nine rebounds, while Jazz Johnson and Rashad Jackson finished with 14 apiece.

The teams traded leads early before San Diego closed the first half with a flurry of three-pointers and carried a 43-31 lead into the break.

The Toreros extended the lead to 18 points early in the second half, but the Pilots answered with a 20-4 run capped by an Andre Ferguson three-pointer and two free throws to make it 55-53 with 9:45 to go. San Diego responded with an 8-0 run to push the margin back to double digits.

Portland would cut the deficit to 68-62 on a Johnson three-point play with four minutes remaining, but USD extended the margin and made free throws down the stretch to secure the win.

San Diego shot 54 percent from the field and made 13-of-31 three-pointers in the game, while the Pilots finished at 49 percent overall and drilled 10-of-14 threes. Portland also made all 20 free throw attempts in the game.

Portland will now prepare for the WCC Championships to be held March 3-7 at the Orleans Arena in Las Vegas. The winner between the Pilots and Toreros on Friday will play No. 2 seed Saint Mary's on Saturday at 9 p.m. on ESPN2.