University of San Diego release SAN DIEGO -- Riley Adams hit a two run home run to break a 2-2 tie in the bottom of the seventh inning to help lift the Toreros (4-2) to a 7-2 win over Oregon (4-3) Saturday evening. The Toreros were crowned... 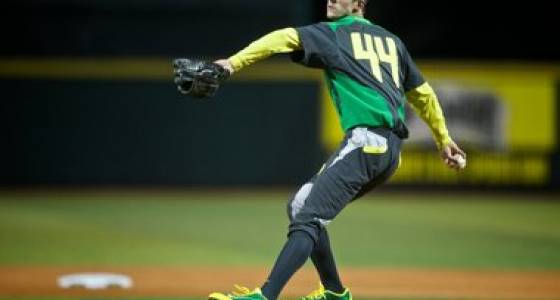 SAN DIEGO -- Riley Adams hit a two run home run to break a 2-2 tie in the bottom of the seventh inning to help lift the Toreros (4-2) to a 7-2 win over Oregon (4-3) Saturday evening. The Toreros were crowned champions of the Tony Gwynn Memorial Classic after going 3-0. Tennessee also went 3-0, but the Toreros had a larger run differential, the tournament tiebreaker.

Riley Adams was named the tournament's MVP and OF Hunter Mercado-Hood and 1B Roman Garciawere named to the All-Tournament team.

Oregon jumped out to a quick lead, scoring two runs in the first inning and chasing Torero starter Jonathan Teaney. With runners on second and third, A.J. Balta hit a two-run single to left field. Tim Sunsara then doubled down the right field line, causing Rich Hill to pull Teaney for Chris Murphy, who struck out Gabe Matthews looking to escape the jam.

The Torero bullpen was lights out, pitching 8.1 innings of shutout ball. Murphy and Troy Conyers allowed just four hits combined and struck out 13.

The Toreros tied the game up in the bottom of the second with a pair of solo home runs to right by Hunter Mercado-Hood and Bhret Bewley. It was the first home run of the season for both players.

After Oregon got four hits in the first inning, they would get just two more in Murphy's 4.2 innings of relief. Murphy, who struck out eight Ducks, was lifted for Troy Conyers with two runners on and just one out in the top of the sixth, who retired the next two batters to end the scoring threat.

The Toreros took the lead in the bottom of the seventh when Riley Adams blasted a mammoth two run home run to left field, giving USD a 4-2 lead.

USD added three more insurance runs in the bottom of the eighth inning. Jeff Houghtby hit a two-run single with the bases loaded, his third hit of the evening, and then Colton Waltner hit a RBI single to left. Conyers (1-0) pitched the final 3.2 innings and held the Ducks to just two hits and struck out five.

"I can't say enough about the performance of Troy Conyers, getting the save last night and then pitching 3.2 innings tonight against a tough Pac-12 team," Hill said.

The Toreros will square off against Oregon again Sunday afternoon at 1:00 p.m.