Recent days have seen the NHL trade market open for business and brimming with activity, with Ducks general manager Bob Murray one to be credited with shaking it loose from its doldrums.As Wednesday’s deadline approaches, Murray put out the open sign... 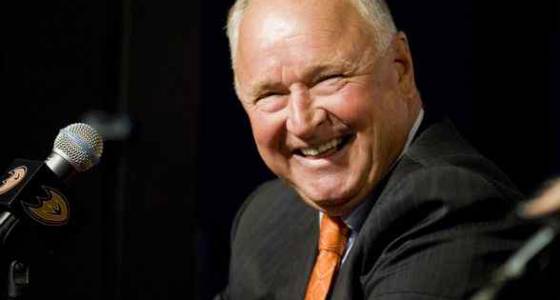 Recent days have seen the NHL trade market open for business and brimming with activity, with Ducks general manager Bob Murray one to be credited with shaking it loose from its doldrums.

As Wednesday’s deadline approaches, Murray put out the open sign Friday by getting 21-goal scorer Patrick Eaves from Dallas for what could be a first-round pick if the Ducks get to the Stanley Cup playoffs and win a couple rounds. That’s how the Ducks would like it to play out.

But is Murray done?

At previous deadlines, the longtime GM has operated with a lot of salary-cap space but that is nonexistent now. Eaves’ cheap $1 million salary for just this season only made him possible. It doesn’t mean the Ducks have shut their doors as Murray has shown he isn’t one to sit these things out.

But the most significant move will have to come from within. The Ducks need Ryan Kesler to return to his All-Star first-half form, Ryan Getzlaf to take more of the load off his fellow teammate and Corey Perry to be something closer to the star that filled the nets for his first 11 seasons.

Those three make the most money and eat up the most cap space. They’ll go nowhere if they don’t lead the way. As the Ducks went into their bye week, Murray simply said, “We have some players that have just not had good years.” He didn’t name names, but he didn’t need to.

“We have time to turn those things around,” Murray added. “Hopefully our players understand that for some of them time is running out in more chances to win. You hope they get that, but you don’t know how people think. I can’t think for other people.”

There is a reason Murray is receiving as many calls as he is making. The Ducks are flush with attractive defensemen on their roster and those who might be NHL regulars sooner than later. But they’re also whom Murray holds onto as if he were handcuffed to them.

Hampus Lindholm is now a long-term cornerstone and Cam Fowler has played too well to consider moving. Sami Vatanen has struggled this season and could be expendable. But he is also signed to an affordable four-year extension and leaves only if a young, core future piece is the return.

The Eaves deal Friday reflects Murray’s thoughts on high-end prospect trio Brandon Montour, Shea Theodore and Jacob Larsson. None will go for a rental player the Ducks will have for two or three months. There are no extra draft picks to peddle and they’re not moving their first-round pick.

Forward Sam Steel is having a massive season in the Western Hockey League, but he is part of the young talent the Ducks need to work in up front as the big three of Getzlaf, Kesler and Perry age. He’s not going anywhere.

The Ducks can use another scoring winger. A depth upgrade on defense is possible but far down the list.

Capfriendly.com does not have the Ducks with any cap space, but having Simon Despres ($3.7 million) and Clayton Stoner ($3.25 million) on long-term injured reserve has given them flexibility.

Rumors have had them linked to Vancouver’s Jannik Hansen and Ryan Miller. Neither seems realistic unless the Canucks took a significant contract the Ducks would want to shed in return.

The Ducks are 20th in offense (2.54 goals per game) and their power play has fallen to 15th with its current 1-for-32 streak. Rickard Rakell has 24 goals, but Getzlaf and Perry each have 11 — three fewer than Andrew Cogliano.

During their current run of playoff appearances, Murray has been active on deadline day. His 2013 work was minimal as Brandon McMillan was dealt for Matthew Lombardi. Lombardi played seven forgettable games and was out of the league, but so was McMillan two years later.

A minor Alex Grant-for-Andre Pettersson deal was made in 2014 but Murray was busy in the days before, sending winger Dustin Penner to Washington and goalie Viktor Fasth to Edmonton. The big pickup, defenseman Stephane Robidas, broke his leg for a second time in Game 3 of a first-round series against his old team, Dallas.

With his team second in the West in 2015, Murray went berserk and had mixed results at best. James Wisniewski was not needed and never played. So was Korbinian Holzer, although he has remained an effective extra on the blue line. Depth center Michael Sgarbossa has been turned into lineup regular Logan Shaw.

Despres made the most notable impact, playing well alongside Fowler and turning that into a five-year contract extension that fall. That contract, ironically, is looking like a major albatross if he isn’t able to recover from his significant concussion issues.

In 2016, Murray swapped Carl Hagelin for David Perron in January before his deadline wheeling and dealing. Patrick Maroon was shipped out, Jamie McGinn was brought in. Brandon Pirri was a flier coming off injury but he suffered a concussion. Not only did Perron and McGinn leave as free agents, but Maroon has a career-high 20 goals playing with Connor McDavid.

Slimmer now that they’ve already added Eaves. The Ducks can use someone else that can finish around the net. An upgrade on the fourth line can make them deeper. It also never hurts to have another NHL-quality defenseman, especially with Despres and Stoner injured and not realistic options.

But there’s the aforementioned cap problem. And don’t count on a star-for-star transaction, which largely happens only at the draft now.