Ryan Palmer shot a 5-under 65 on Friday and shared the lead with PGA Tour rookie Wesley Bryan going into the weekend at the Honda Classic in Palm Beach Gardens, Florida.Palmer made seven birdies on another day of ideal scoring and reached 9-under 131.Bryan,... 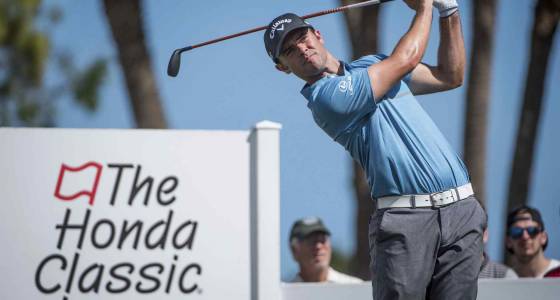 Ryan Palmer shot a 5-under 65 on Friday and shared the lead with PGA Tour rookie Wesley Bryan going into the weekend at the Honda Classic in Palm Beach Gardens, Florida.

Palmer made seven birdies on another day of ideal scoring and reached 9-under 131.

Bryan, who had his best PGA Tour performance last week at Riviera, shot a 67 and saved his round with a bogey on the 13th hole.

They were a shot ahead of Rickie Fowler (66), with Anirban Lahiri (68) another shot behind.

Palmer took four months off at the end of last year when his wife was diagnosed with breast cancer. He said the recovery is going well.

“I watched a few tournaments,” Palmer said. “There were times when she said I should have gone and played. I was going to play Vegas and I was going to play Malaysia, but after that, there was no way I could play golf. Enjoyed time at home, took care of the kids. But it was a lot of hard times, for sure.”

Along with five birdies Friday, Bryan’s biggest moment was his bogey on the 13th when his only option was using a putter to get out of the trees. He holed an 8-foot bogey putt to keep in range, and then he holed a 10-foot birdie putt on the 18th to tie for the lead.

“Don’t like making bogeys, but any time you find yourself using a putter out of the trees for your second shot, it’s not good,” he said. “Glad to settle for bogey there and glad to get one on 18, tied for the lead going into the weekend.”

The cut was at even-par 140, matching the highest cut since the Honda Classic moved to PGA National in 2007.

Among those missing the cut was Shawn Stefani, but not without doing all he could. One over the cut line with four holes to go, he drove into the water on No. 6, stripped down to his underwear and blasted out to the fairway. He still made bogey.

Heavy rain washed out most of the play in the LPGA Thailand in Chonburi.

Play was called for the day at 3:45 p.m., and 13 players didn’t start the second round, including leaders Ariya Jutanugarn of Thailand and Amy Yang of South Korea. Jutanugarn and Yang each shot 6-under 66 on Thursday at Siam Country Club’s Pattaya Old Course.

England’s Paul Waring topped the Joburg Open leaderboard at 12 under after 12 holes of the second round when play was suspended because of darkness.

Waring was playing Royal Johannesburg and Kensington’s par-71 West Course after opening with a 6-under 66 on the East Course, the site of the final two rounds.