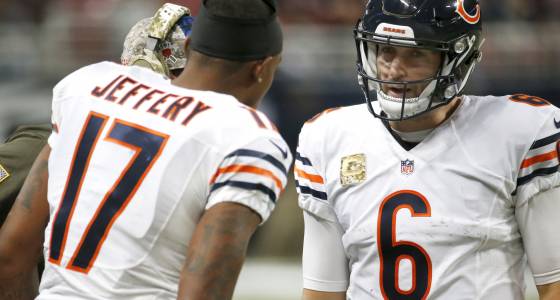 With only eight days remaining before business opens on the NFL’s new league year, Bears general manager Ryan Pace met with reporters Wednesday at the NFL scouting combine and discussed the team’s quarterback situation, pending free agent Alshon Jeffery and other topics about their attempt to bounce back from the worst 16-game season in franchise history.

Pace admittedly offered few details at what he deemed a sensitive time on the NFL calendar, but his media session did offer a few highlights from which to gain insight.

Jay’s under contract, so it’s fluid. I would describe it as fluid. There are a lot of conversations going on between us and Bus Cook. I think one of the things with Jay I value is his agent, Bus Cook. We’re close, and I think at times like these that relationship is important because we can be honest and transparent. I think he’s one of the top agents out there, and I think that helps in this process.

On how he would like for Cutler's status to be resolved

It’s fluid; a lot’s got to play out. I think, in general, the quarterback situation — and obviously that’s the hot topic, and it should be — there are a lot of scenarios right now, and there are a lot of different things that can happen. It’s fluid throughout this week and as we approach free agency and even after free agency. It’s our responsibility to have a plan in place — which we do — that’s flexible and adaptable as the landscape is changing and that’s kind of where we’re at.

On which of the quarterback options attract him

I guess just the number of different options, whether it’s trades or free agents or draft or staying the course with what we have. There are a lot of different options, and, honestly, I just have to be flexible because there are some unpredictable things that can happen along the way. And we’ve kind of gone over every situation, and that’s where we’re at.

On the decision not to use the franchise tag on Jeffery

It was thought out thoroughly, obviously. I think sometimes when you can’t come to a common ground with a player and an agent, sometimes it’s necessary to kind of test the market to determine that player’s value, and that’s really where we’re at. He’s a good player, and we’ll see how it plays out. But I think there are certain instances where testing the market is a necessary part of the process.

On the Bears' plan if Jeffery signs elsewhere

Our approach — starting with [director of player personnel] Josh Lucas, [director of pro scouting] Champ Kelly, our pro scouts — they’ve done a great job, and our free-agent board is stacked. There’s options in free agency and in the draft, and we have to see how it’ll play out. We’ll know a lot more in the coming week. A little over a week from now I’ll be able to answer questions a little more direct.

We have plans in place for every one of these scenarios. I feel extremely prepared for this free-agency process that we’re about to enter, and it gives me confidence with all these different scenarios.

You can get a feel for their release and velocity. But we’ve got to be careful here. You see a lot of mistakes made when you get enamored with these measurables and whatnot. They’re important, and it’s important to see apples to apples, but it’s all on the tape. These guys are working out in their underwear, and we have to make sure the weight is on what we see as a football player.

On reaching for a quarterback at No. 3 overall because of need or trying to get good value for the pick

I think you have to get value. I think when you talk about reaching at any position it’s hard. I’ve referenced teams that I’ve been a part of before where I feel like we’ve done that. And I’ve learned from that experience. You just have to be careful about doing that. I think what happens with us is that you get competitive and you know you need this position — and it doesn’t happen the day of the draft — it happens in the months preceding the draft. You start convincing yourself that you need to start pushing a certain position up the board. And that’s when the mistake is made. So we have to be conscious of that at any position. And there are positions in this draft that are really strong. And some of those positions fit our needs. And then there are certain positions in the draft that aren’t very strong. So you just have to recognize that.

Draft season is fully engaged and the many prospects are already well along the proverbial road to the podium.

It does. Because I think you want to see a guy who has elevated his program. Again, you just reference places you’ve been. I know I’ve talked about this player a lot because he had a big impact on me, but I think about Brees when he was at Purdue. And he elevated that program. He took them to the Rose Bowl. I think that means something. I think that’s something that we have to pay attention to.

As we went forward with that, it was really getting more opinions on the shoulder. And so, I mean, guys, at this point, when you get three, four different opinions on the shoulder, and it was determined that the best course of action wasn’t a surgery. So, really, for us that’s good. We’re trying to avoid surgeries if we can. So. He’s not going to have to have a shoulder surgery. And he can just focus on his ankle rehab.

He’s working hard, and there’s daily progress on that. It wasn’t just one or two doctors, it was multiple opinions and doctors with a lot of conviction that this was the right thing to do. He’s strong. He’s kind of a freak genetically. His shoulder’s doing good. There’s going to be maintenance as far as strength and everything, which he’s doing. We don’t have a lot of concerns with that right now.

He’s coming along fast. I still have a lot of confidence in him. He has a lot of confidence in himself. We’re getting daily reports on his progress. I just want to see steady, consistent progress from him. Right now he’s getting his body all in alignment, and he’s feeling good. When I see footage of kind of where he’s at now, I get excited. I just want to see steady improvement.

Photos of the Bears wide receiver Kevin White, the No. 7 overall pick in the 2015 NFL draft.