Palmyra (N.J.) wide receiver Taj Harris has taken on a lot since the graduation of Kelvin Harmon, a 6-3, 190-pounder who made the All-ACC freshman team in 2016, while playing for N.C. State. Hence, Harris had some huge shoes to fill as a junior.... 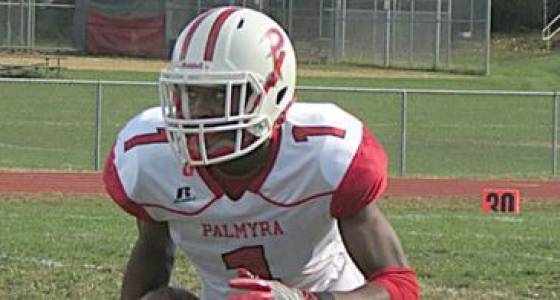 Palmyra (N.J.) wide receiver Taj Harris has taken on a lot since the graduation of Kelvin Harmon, a 6-3, 190-pounder who made the All-ACC freshman team in 2016, while playing for N.C. State.

Hence, Harris had some huge shoes to fill as a junior.

"It went well, really," Harris told NJ.com. "It was just like a young team. It was a lot of seniors lost, Kelvin, Max (Smythe), the offensive and defensive lines. But we did alright, stuck together for a young team. We were rocking."

But not only was Harris left to pick up the pieces on the gridiron, but the hardwood as well. And he's become one of the most prolific scorers in the state because of it.

Officially, over 25 games this season, Harris averages 26.5 points per game, 7.8 rebounds, 4.6 assists, 3.9 steals, has hit 34 three-pointers and easily eclipsed the 1,000 point mark in his career earlier this year.

While on the field, he torched teams from multiple positions and was usually the best player to suit up.

Hence, Harris is looking for a two-sport opportunity in college, which he believes will enable him to reach his full athletic potential.

"I really want a two-way offer for basketball and football," he said.

But so far, he's only received football offers --  from Rutgers, N.C. State, Temple and Syracuse.

"It's a few, a couple basketball schools came out, but like I don't have any serious offers," said the point guard. "But that's because I haven't played AAU. But I'm about to start playing AAU.

"A couple colleges came out but really LaSalle and then Syracuse was talking about recruiting me for both but I'm not buying into it until I get an official offer."

Harris has no leaders at this point.

"In my recruitment right now, I don't know if I'm staying in-state or if I'm leaving the state, really. So nobody really leads," he said.

A three-star recruit in football, Harris will take his time with the process.

"I'm really waiting for next year for my recruitment to open up more," he said. "And I'm going to get my SATs done in May."

But up to this point, he's built the strongest relationship with Rutgers, which he's visited 6-7 times since the beginning of the 2016 season.

"I like Rutgers a lot. Coach Ash, the whole coaching staff, they're all cool. I keep in touch with them," he said. "I love watching their football games, I like the people on their team."

"I hit up a couple of their games and me and coach (Matt) Hewitt were in touch a lot," he said. "They were looking at my film. They had my film for a little bit and they just offered me eventually."

Harris says Rutgers was most compelled to offer due to his explosion.

"I'm explosive and then they see year after year that I got better and better and they just like that I make big plays," he said.

But the program might have a bit of a fight on its hands.

"I like Syracuse a lot," he said. "N.C. State, because my peoples goes there. Rutgers, I like Rutgers. Temple. I like everybody really but I don't really have anyone in the lead."

4-star So. N.J. DB warming up to Rutgers

Rutgers sees Harris as a pass-catcher although he can do a number of other things just as well.

"They want me at wide receiver, but I can be a quarterback too because I can throw the rock. I mean, I can do a lot of things in their offense, but most likely wide receiver," he said.

Harris has only visited Temple and Rutgers this year, and currently has no other unofficial visits on the schedule. However, he hopes to attend a number of junior days over the next few weeks.

Virginia Tech, UCF, Old Dominion and Boston College are also recruiting Harris diligently and could end up offering over the next couple months.