OKLAHOMA CITY -- Maybe it was the post-All-Star break glow, or maybe it was the trade deadline additions, but Russell Westbrook was in quite a good mood after the Oklahoma City Thunder's shootaround on Friday morning.Proof? He talked to reporters for almost... 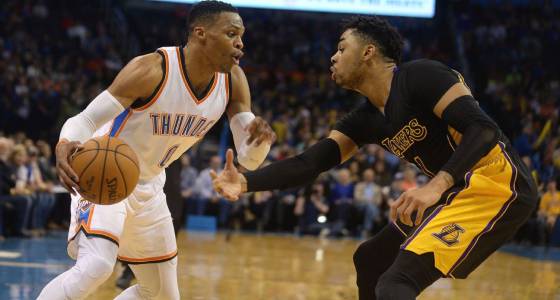 OKLAHOMA CITY -- Maybe it was the post-All-Star break glow, or maybe it was the trade deadline additions, but Russell Westbrook was in quite a good mood after the Oklahoma City Thunder's shootaround on Friday morning.

Proof? He talked to reporters for almost four and a half minutes, which for Westbrook might as well have been a TED talk.

And with the newly acquired Doug McDermott and Taj Gibson in the lineup Friday against the Los Angeles Lakers, plus Enes Kanter back from a broken arm, the Thunder flexed a little, pulling away late for a 110-93 win.

Of course, all that follows requires the full context and perspective of the Thunder playing the Lakers, but with so much of the conversation centering around the help that Westbrook needs, the Thunder certainly looked improved. McDermott played 19 minutes, Gibson 21. They combined for 20 points. It wasn't some overwhelming, emphatic debut for either, but it did present the Thunder with a restructured, more whole look.

Case in point: Westbrook didn't make a shot until late in the second quarter and finished just 4-of-18 shooting. Victor Oladipo, the Thunder's second-leading scorer, was a late scratch because of back spasms. Kanter clearly was rusty in his return, hitting just 2-of-12 from the floor.

But the Thunder offense hummed anyway, with Westbrook piling up seven assists in the first six minutes of the game. He found Alex Abrines (19 points, 5-of-11 from 3), who will find a larger role with the departed Anthony Morrow, early and often. Andre Roberson scored a career-high 19 on 8-of-9 shooting. Steven Adams was dominant on the interior. The Thunder were balanced, and Westbrook clearly enjoyed playing with his new weapons.

"It's a lot better to be with him than against him," said McDermott, who had 8 points and 4 rebounds.

In the end, it was the 28th triple-double of the season for Westbrook -- 17 points, 18 rebounds and 17 assists in just 35 minutes. It took him only 19 game minutes to register it, another notch in Westbrook's lengthy speed triple-double list. Even with his shooting off, Westbrook controlled -- and dominated -- the Lakers.

"Oh my gosh," Thunder coach Billy Donovan said, "I thought he was unbelievable tonight in so many different areas."

Something few thought the Thunder had two days ago was depth. But even with Oladipo sidelined, the Thunder appeared far more rounded out. Westbrook remained the focal point, with everything running through him while he was on the floor, but the spacing was better, and he was able to lift every unit he played with. That's the story for this Thunder team going forward: It's not really about how the players around Westbrook make him better, or the game easier, or lessen his load. It's about him having the kind of players he can make better.

A player like Abrines, a rookie the Thunder have been extremely high on even while he was playing professionally in Spain, is a prime example. He had a career scoring night in his first-ever start, showing off his marksmanship from the perimeter. Any player benefits from playing alongside Westbrook, but especially a shooter such as Abrines. And vice versa.

"This is my first year, so to be in the starting five and hear your name before the game, it's something nobody is going to take away from me," Abrines said. "I can tell my son, 'One day I was on the starting five with Russ and these guys.'"

The Thunder feel they have two of the more talented young shooters in basketball in Abrines and McDermott, and as they reshape the roster to fit Westbrook's style, those kind of players will be vital.

But the Thunder don't want to lose their identity -- length, athleticism, size at each position and physicality. They are trying to merge styles and discover what works and what doesn't. It's only one game, but it would appear the Thunder are at least starting to get an idea.