There were times early this season when it was fair to wonder if the Boston Celtics and their quest for premium seeding in the Eastern Conference playoffs might run counter to the development of rookie Jaylen Brown. High draft picks typically are welcomed... 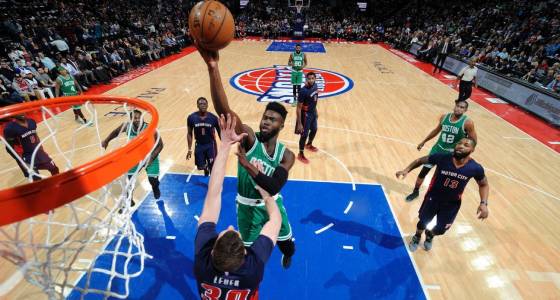 There were times early this season when it was fair to wonder if the Boston Celtics and their quest for premium seeding in the Eastern Conference playoffs might run counter to the development of rookie Jaylen Brown. High draft picks typically are welcomed to the NBA with immediate playing time, but Boston's situation -- drafting high in the lottery thanks to their collection of Brooklyn Nets future picks but with enough talent to compete for a top spot in the East -- meant there were times when Brown had a shorter leash than a typical rookie playing for a non-contender.

Coach Brad Stevens remained emphatic that rookie development extends beyond playing time, even as he did his best to find consistent minutes for Brown. When starting shooting guard Avery Bradley injured his Achilles in early January, Stevens leaned more heavily on Brown. And when it became evident that Boston benefitted more from keeping third-year guard Marcus Smart with the second unit, Brown ultimately elevated to Bradley's starting job.

On Sunday night in Detroit, Brown produced the signature moment of his rookie season. The ball swung his way in the final minute with Boston trailing by one, and Brown calmly drained a corner 3-pointer -- while being fouled -- with 37 seconds remaining to help the Celtics escape The Palace at Auburn Hills with a 104-98 triumph over the Detroit Pistons.

The 20-year-old Brown finished with 13 points on 5-of-9 shooting to go along with five rebounds, two steals, and an assist. He wasn't perfect and had a team-high four turnovers, but Brown finished plus-14 in plus/minus over 25 minutes, 39 seconds of playing time.

"I've worked on my shot because that's what people have been critiquing me on my whole life," Brown told reporters in Detroit after Sunday's win. "I think I've gotten a lot better and I'm going to continue to get better at it. I like to get to the basket but some of those shots I do have to let fly."

Brown missed with an opportunity to complete the four-point play on his big shot, but Smart, the Boston player most likely to make a game-changing play based on pure grit, muscled his way into the paint and drew a foul while trying for the offensive rebound. Smart made both of his freebies to essentially seal a much-needed victory for a Boston team that wasn't particularly crisp in the second half while kicking away another double-digit lead.

Brown, playing crunch-time minutes after Detroit rallied ahead, had numerous big moments. Like when he crashed the glass for an offensive rebound of a Jae Crowder missed layup with Boston down 2 with under two minutes to go. Brown got fouled going back up and made one of the freebies.

Brown has benefited from Boston's lack of depth at small forward and has played both behind Crowder and filling in for him when Crowder missed eight games due to an ankle sprain.

At All-Star weekend, Stevens, who coached the East stars, admitted that maybe a small silver lining to Bradley's extended absence was the ability for Brown to see more time, especially in the starting role. Brown went 9-1 as a starter after elevating to Bradley's spot in late January and is now 10-2 overall in the starting role without Bradley (Brown went 0-3 in Brown's three starts in place of Crowder earlier in the season).

The increased floor time has absolutely helped Brown gain confidence, not only in his offensive game, where he's finishing better now both when he attacks the basket and while finding higher percentage shots from the perimeter like the corner sweet spot (52 percent for the season).

The results can be seen in Brown's improved stat line since Bradley was injured:

A look at how Jaylen Brown's production has spiked since Avery Bradley injured his Achilles in early January:

Defensively, Brown no longer has to worry about a quick hook if he has a mental lapse or drifts from his man. And his individual stats have been excellent. There were times early in the season when Brown would lose track of his man and Stevens would pull him quickly. Stevens has praised Brown for his defensive improvements lately and now can trust him more, adding size and versatility for switch-happy Boston.

When Brown stays in front of his man, he's a capable defender. The league's player-tracking data suggest he holds opponents to 39.6 percent shooting this season, or 4.9 percent lower than those players' season average.

A check of Synergy Sports' defensive data has Brown in the 88th percentile among all defenders, holding opponents to 0.805 points per play. In fact, Synergy's data suggests that, among all players with at least 300 players defended, Brown ranks 15th in the league in points allowed per play (that's just four spots behind Golden State's Draymond Green at 0.798 points per play).

Neither the NBA's tracking data or Synergy's numbers can quite take into account the times that Brown has lost his man and others were forced to step up for him, but the eye test suggests those instances have been less common as the season has gone on.

With Bradley set to return soon, Brown's minutes could get throttled. He will essentially be competing for backup guard/wing minutes with Terry Rozier, though Brown's ability to defend bigger players could open additional time at forward spots (maybe even biting into Jonas Jerebko's playing time while he continues to struggle in the aftermath of a broken nose that's forced him to wear an uncomfortable mask).

Brown's defense might keep him on the court moving forward but he showed Sunday his offense can be important as well.