LOS ANGELES -- If you hang around the Houston Rockets long enough, you become numb to what's going on.They take, and hit, 3-pointers en masse. That's what the Rockets do, and they offer no apologies for amount of times they do it.The Rockets were at it... 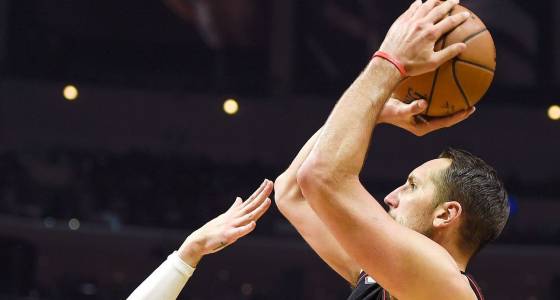 LOS ANGELES -- If you hang around the Houston Rockets long enough, you become numb to what's going on.

They take, and hit, 3-pointers en masse. That's what the Rockets do, and they offer no apologies for amount of times they do it.

The Rockets were at it again Wednesday night, taking 52 3-point attempts in a 122-103 blowout of the Los Angeles Clippers.

Houston made 20 triples through three quarters, including a NBA record-tying nine in the third quarter.

"You don't realize how many 3-pointers we're taking because it's so natural for the way we play," said Ryan Anderson, who made six 3-pointers. "It's fun basketball when you trust that the next guy is going to make the shot, and James [Harden] did a great job of making the right plays and getting us open."

The NBA record for most 3s in a regular-season game is held by the Rockets and Denver Nuggets at 24. Houston has hit that mark twice this season and had a chance to establish a new standard in the fourth quarter. It didn't happen, as they missed all of their 13 3-point attempts.

"Knocking down 20 3-pointers is pretty good," said Eric Gordon, who sunk three 3-pointers. "We had it going all day and played some good defense. Whenever we play good defense, that gives us a chance to operate on the offensive end."

Houston is so hard to defend when they're able to spread out a defense, take the extra pass and hit shots. Defenses have to worry about Harden's passing and shooting abilities. If defenses clog him down, he's got shooters such as Trevor Ariza, Patrick Beverley, Louis Williams, Sam Dekker, Gordon and Anderson waiting for his passes.

Isaiah Thomas led the way but got help as the Celtics held off the Cavs for a big win in Boston.

• Thomas: 'Nobody holds me in check'
• Cavs excited about lineup experiments
• Clutch Kawhi having epic Spurs season
• It's easy to become numb to Rockets' 3s

If those go away, Harden can run the pick-and-roll with his centers Clint Capela and Nene Hilario. While the outside guys were taking care of business against the Clippers, Capela and Nene combined for 10 made field goals, 30 points and 22 rebounds.

If you don't believe in the Rockets, ask Clippers coach Doc Rivers about how difficult things were for his team Wednesday. At halftime they were booed off the court, trailing 70-58.

"I just thought they played harder, they played with more energy," Rivers said. "They attacked. They stuck with their stuff."

That stuff is side pick-and-rolls, high pick-and-rolls, drives and kickouts for corner 3s. When an opponent misses a shot, the Rockets are off to the races. It's not exactly fast-break mode, but getting to spots in the half court so Harden can operate.

The Rockets scored 38 points in the third quarter, 27 of those coming off 3-pointers. They had just one two-point basket, a layup from Williams.

The Clippers didn't shoot badly, making 9-of-18 shots. But when they missed, Houston snagged the rebound, picking up eight second-chance points and five fast-break buckets.

"It started at the end of the first and second quarters because our second unit did a heck of a job," Rockets coach Mike D'Antoni said. "Eric Gordon was terrific off the bench as usual. I don't think the Clippers were playing particularly well, but James was picking them apart and [Gordon] hit a few 3s, which makes us hard to guard."

The Rockets have attempted 50 3-point shots in a game nine times this season, and D'Antoni believes his team can average at least 50 a game. His theory is derived from the fact that the Rockets currently average 40.4 3-point attempts a game, which is a number that should increase thanks to the acquisition of Williams.

When the Rockets added Williams in a trade with the Lakers two weeks ago, he was averaging 5.4 3-point attempts a game. He has averaged 9.3 attempts in his first three games with the Rockets. He's getting better looks with the Rockets than he was with the Lakers and is being asked to be aggressive with those looks. Williams struggled from 3-point territory on Wednesday, missing six of his seven attempts. It didn't matter though, as Anderson, Beverley and Harden converted a combined 14 of 28 3-point attempts.

In the grand scheme of things, the Rockets expect the wide-open offense to be a challenge for playoff opponents. It's an offense that can knock you out very quickly, like it did to the Clippers on Wednesday. If it struggles, which has been the case at times for the Rockets, life can be difficult.

"We need that sort of balance on the offensive end to get where we need to go," Harden said. "Having multiple guys in double-figures is really important for us."